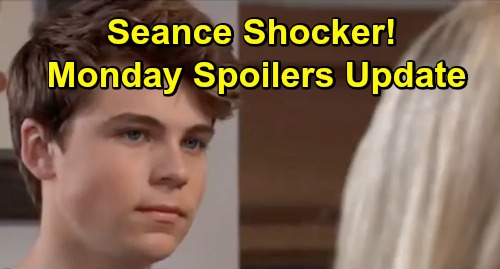 General Hospital (GH) spoilers update for Monday, June 17, tease that Maxie Jones (Kirsten Storms) will be on edge. She’ll have a surprise party planned for Peter August’s (Wes Ramsey) birthday, so she’ll count on Mac Scorpio (John J. York) to help her out. Mac will assure a nervous Maxie that everything’s covered, but she’ll remain on edge anyway.

When Peter orders pie at Kelly’s, Maxie will panic and question if he doesn’t like cake. Peter will contend that he likes cake just fine, but he prefers pie. Maxie will grumble that Peter should’ve told her, so he’ll be left wondering why she’s so upset over his dessert choices. Peter will ask if Maxie’s OK, so she’ll have to dial down her party anxiety if she wants to preserve the surprise.

Nearby, Laura Webber (Genie Francis) will have a pitch to make. She’ll tell Mac that she needs a fill-in police commissioner that Jordan Ashford (Briana Nicole Henry) trusts. Laura will add that she needs someone who would be willing to walk away once Jordan has recovered. Mac will think that sounds like a great plan, but he’ll be floored when Laura insists he’s the one she has in mind.

While Mac returns to the role of commish, Cynthia Watros will take over the part of Nina Reeves. Nina will meet with Curtis Ashford (Donnell Turner), who’ll be obsessing over Jordan’s many medical bills. General Hospital spoilers say Nina will want to take care of everything, but Curtis will reject the offer on the spot.

Jasper “Jax” Jacks (Ingo Rademacher) will also reject an offer in Monday’s new GH episode, June 17. Valentin Cassadine (James Patrick Stuart) will want to buy Jax’s half of Aurora Media, but Jax won’t be interested. He knew what he was doing when he made his purchase; he’ll also know what Valentin is doing by trying to buy him out.

Jax won’t be afraid of a little competition when it comes to Nina’s heart. He’s already got his eye on her, so Valentin will have to stay on guard. Back with Jordan, she’ll fret over Ryan Chamberlain’s (Jon Lindstrom) stolen kidney. Jordan doesn’t want to make trouble for the people she cares about, so she intends to look the other way on the scheme. After all, it saved her life and Ryan deserved to pay.

Even so, Jordan doesn’t like any of this. She’ll seek updates on Ryan’s health from Hamilton Finn (Michael Easton) and hope he’s on the mend. Jordan wouldn’t like it if the kidney theft caused major problems. Across town, Kim Nero (Tamara Braun) will be back in Port Charles. She’ll continue to struggle as she leans on Julian Jerome (William deVry) for support.

Kim just won’t know who she is if she’s not a mom. Being Oscar Nero Quartermaine (Garren Stitt) was Kim’s main job for so long, and she truly loved it. Kim will feel like she’s lost herself, but Julian will undoubtedly remind Kim that she’ll never lose the title of “Mom.” She’ll be Oscar’s mother for as long as she lives, even though he’s not around anymore.

Finally, it seems Josslyn Jacks (Eden McCoy) will explain her séance idea to her friends. Trina Robinson (Sydney Mikayla) will think it’s a great idea, but what about Cameron Webber (William Lipton)? Will he agreed with Lucy Coe (Lynn Herring) and argue that Oscar wouldn’t want Joss to fixate on the past?

Whatever the case, Cameron should come around on the idea if Trina and Joss pressure him into it. Part of him may even want to hear what Oscar might have to say. General Hospital spoilers hint that some séance shockers could be looming soon enough.

It sounds like some gripping scenes are coming up. We’ll keep you posted as other GH news emerges. Stick with the ABC soap and don’t forget to check CDL often for the latest General Hospital spoilers, updates and news.