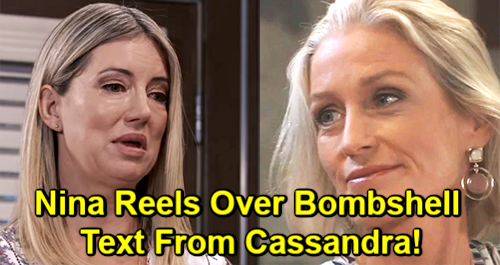 Nina’s professional resolve broke as she got choked up over Sasha Gilmore’s (Sofia Mattsson) serious illness. She has no way of knowing how long Sasha will have to be hospitalized – or if Sasha will even survive.

Hamilton Finn (Michael Easton) will keep working toward a cure, which will require more tests and additional risks for Valentin Cassadine (James Patrick Stuart). The closer Finn looks at the situation, the more likely it becomes that Finn will discover the fake daughter shocker. However, we want to talk about a different bombshell – one that’s headed Nina’s way courtesy of an old foe.

Michael Corinthos Had No Idea They Dined With The Enemy

Naturally, we mean Cassandra Pierce (Jessica Tuck). She’s the one who caused this mess with her little grapefruit injection on Sonny Corinthos’ (Maurice Benard) island. On August 26, Nina will get a text that leaves her shocked. Will it be from Cassandra? “Sandy Lance” took a selfie with her new “friends” at breakfast, and we’re willing to bet that’s exactly what Nina will receive.

GH fans know Michael Corinthos (Chad Duell) is perplexed about this whole situation as well. He has no idea that they were dining with the enemy, but Nina may be able to clear things up soon. She’ll instantly recognize “Sandy” as Cassandra if she indeed receives this photo.

Cassandra might also make her demands if there’s an antidote she’s willing to pass along. If not, Cassandra may just want Nina to suffer! This could be an opportunity for General Hospital to take Cassandra in an incredibly ruthless direction.

Is Nikolas Cassadine Also In Grave Danger From Cassandra Pierce?

GH viewers have long suspected that Cassandra might have a Helena Cassadine (Constance Towers) connection. Between her name and resemblance to Helena, it’s possible they’re related. If not, Cassandra still could’ve been mixed up with her.

We know Constance Towers will make an appearance in an upcoming Shiloh Archer (Coby Ryan McLaughlin) flashback, so Helena will be part of the story again. Of course, Cassandra was also swiped from the clinic by someone wearing a Cassadine ring. She’s definitely been spotted with an unidentified man, so that’s something else to keep in mind.

Nikolas Cassadine (last played by Nick Stabile) hints are dropping all over the place as well, but he’s in grave danger. Is that due to Cassandra? Several storylines seem poised to collide, and Cassandra may be at the center of them all!