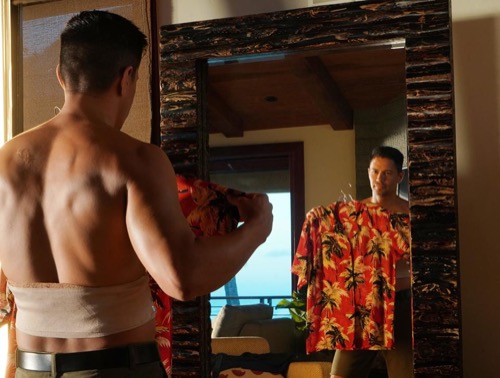 Tonight on CBS their reboot of the classic series Magnum P.I. premieres with an all-new Monday, January 14, 2019, episode and we have your Magnum P.I.recap below.  On tonight’s Magnum P.I. season 1 episode 11 Winter Premiere, “Nowhere to Hide,” as per the CBS synopsis, “Magnum helps a woman find her missing cousin, Sergei, a Russian fugitive; and Higgins’ and Kumu’s lives are put in danger when they get too close to the case.”

Magnum is running down the beach when Higgins runs alongside him with two dogs, he asks what she is doing and she says she is training for Ironman. Magnum gets a call and rushes off.

Higgins ends up at Magnum’s place, knocks on the door and when he answers she tells him she is surprised that he gave up. Magnum explains he didn’t give up, he got a call from a client. Higgins lets him know that the client has already arrived, she is at the gate.

The woman shows Magnum a photo of her cousin Sergei, a Russian fugitive who she grew up with him in Russia and moved to the US last month. They spoke every day and last week, she couldn’t reach him anymore. She is worried that something happened to him, he writes articles that don’t make some people happy and he has been trying to keep a low profile. Magnum asks if she has filed a missing person’s report, she says no, they have to be discreet. If people in Russia find out that she is looking for him, her family could be in danger.

Magnum starts to look for Sergei and notices that two cards are following him. Rick meets Magnum at a popular Russian restaurant, the first place to see if they can get a lead. Magnum shows the owner a photo of Sergei, he recognizes him and promises to call Magnum if he sees him again.

Magnum goes to leave the restaurant and the same guys are outside watching him. Magnum goes to approach them and they almost run him down when the speed away. Rick hops in the car with Magnum and they chase after the guys when they get close the guys to pull over and start shooting.

Magnum is arrested, the police want to know who the guys were that he was chasing. Magnum says that he doesn’t know who they are, he is just looking for a guy named Sergei. Magnum is going to be let go, but Detective Katsumoto this is the last time.

Magnum and Rick are out, TC picks him up.

Magnum shares with Higgins about his case, she calls him a magnet for danger.

Sergei shows back up at the restaurant, Alexi calls Magnum to alert him. Magnum is on his way, Alexi ties to delay Sergei.

Magnum shows up but it is too late, Sergei makes a run for it. Magnum calls TC who is in the helicopter and tells him he has a runner and asks for help tracking him down. Magnum is catching up to Sergei when the two guys who shot at him start running after him.

Magnum knows he should call Katsumoto, but there is no time. Magnum catches up with Sergei and tries to convince him to leave with him, tells him he was hired by his cousin. They make a run for it, with TC’s help, they get away.

Magnum’s client is back to see him, Higgins does a check in a database on her and her name is Ina and she is ex-Russian FSB and she was posing as Sergei’s cousin, who was killed three days ago.

Ina gets through the gate while Higgins is on the phone with Magnum, she comes into the house and attacks her. Ina wrestles with her and is very close to stabbing Higgins, Kumu has a gun and tries to put a stop it, but the two Russian guys who were chasing Magnum show up.

One of the guys calls Magnum and tells him he has one hour to deliver Sergei. Sergei pulls Magnum’s gun and forces him out of the Ferrari, and drives off telling Magnum that there is more at stake than he knows.

Magnum asks TC to try to find Sergei, Rick picks up Magnum. It doesn’t take long for TC to find Sergei, Rick and Magnum are on it, they are two miles behind them, but they have company, the police. Magnum calls Katsumoto and tells him to call off the police and trust him. The police back off, just in time, they find Sergei. Magnum wants the truth, Sergei says the guys don’t want him, they want the nuke he has in a suitcase. Sergei tells Magnum that even though his friends are in danger, he can’t trade them for a nuclear device.

Magnum shows up with the suitcase and gives it to the two Russians when they are bending down to look at it, Magnum releases the Dobermans who attack them. Higgins goes after Ina and knocks her out. The police were outside the gate, they arrest Ina and the two men. Katsumoto called in the pros to take care of the suitcase, Magnum thanks him for trusting. Sergei tells Magnum that he is going to stay in Hawaii, with his cousin dead, he has no reason to go back home. Higgins connects with Kumu after their ordeal.

Higgins and Magnum are back at the beach and he challenges her to a race.