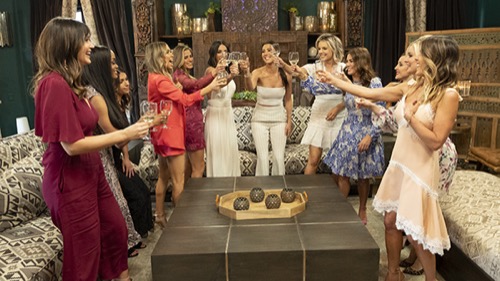 The Bachelorette 2019 airs on ABC this evening with an all-new Monday, May 5, 2018, season 15 special episode and we have your weekly The Bachelorette recap below. On tonight’s Bachelorette called, “The Biggest Bachelorette Reunion in Bachelor History Ever,” as per the ABC synopsis, “Chris Harrison hits the road with Bachelor Nation super fans, revisiting iconic date spots from “The Bachelor” and “The Bachelorette” history. Former Bachelorettes also reflect on their past and new Bachelorette Hannah Brown’s upcoming journey.

Also: Rachel Lindsay and Bryan Abasolo’s wedding preparations and intimate bridal shower; unforgettable “firsts” in the show’s history; updates on some of the show’s most controversial men; and a trip to Hannah’s hometown.”

Tonight’s The Bachelorette Reunion episode begins now – Refresh Page often to get the most current updates!

Tonight Chris Harrison goes in a double-decker bus with Bachelor Nation super fans, revisiting some of the most iconic date spots from “The Bachelor” and “The Bachelorette.” But first, we start with some of the best moments in Bachelor and Bachelorette history. The Bachelor season 19 – Chris Soules and season 17 – Sean Lowe, when some of the women got into calling each other names and insulting each other. Then on to Colton when he jumped the fence and everyone went looking for him while he ran off. We revisit Brad Womack when he was confronted at his women-tell-all. It’s not all negative, we also get to see all the proposals.

Chris is now on the Bachelor Nation bus tour, and they are stopping at some of the most popular date spots. One was when Ali and Robert flew to the top of the building via helicopter and they had to tight rope across a twenty story building, to another one to have dinner.

Next, we see the Watermark Tower where Sean Lowe had one of his crazy dates with Sarah Herron, they did a fee fall 160ft, dropping 40 feet per second.

Chris points out Skyspace, the building played a pivotal role in Nick and Vanessa’s date. Chris tells the fans they are going to go up to the rooftop to see where the date took place. Waiting there for the fans is Nick.

We see some of Ali Fedortowsky-Manno’s experience on the show; she is married and has two children, he not from the Bachelor.

Kaitlyn Bristowe was with Sean after she left the show for 3 1/2 years, but they broke up and she moved to Nashville. Then she met Jason from Becca’s season in 2018, they met on her podcast.

De Anna Stagliano was on The Bachelor season 11, she was the person everyone thought Brad was going to choose, including her. Then she returned as The Bachelorette but still didn’t meet her prince charming. Michael Stagliano was on Julian Harris’ season of The Bachelorette, he has an identical twin named Steven, and she knew within two weeks that she wanted to spend the rest of her life with him.

Jillian Harris really wanted to get married when she was on the show, she picked Ed; but it didn’t work out. She has since met the man of her dreams, she has two children and an amazing job. Being on The Bachelorette was life-changing.

Emily was The Bachelorette season 8, and she is so grateful. She got married in 2014, she met her husband in church, and have pretty much had a baby a year.

Trista was very lucky to have the first Bachelor wedding in 2003.

We take a look back at some of the bad boys, where are they now. Wes had a girlfriend back home, he was only on the show to further his music career. Present day, Wes is living off his singing. He has since found Jesus and had a spiritual awakening.

Justin had a girlfriend back in Canada, he literally walked off the show. Today he is a bartender, he says he gets recognized, the girls love Rated-R, his wrestling persona.

Back to the mansion, the reunion finally begins; arriving are, Becca, Rachel, Jojo, Kaitlyn, Andi, Desiree, Emily, Ashley, Ali, Jillian, DeAnna and Trista. The Bachelorette’s head back into the mansion and mingle with Bachelor Nation.

We get a look back at the twelve Bachelorettes spending the day together in the mansion before Bachelor Nation arrives and all of them agree that they have formed a form of sisterhood. All of the women are grateful and they toast Hanna and wish her the best in her upcoming season.

Chris visits Hannah in her hometown, she brings him to a diner. She reveals to Chris that she was homecoming queen. Next, Chris meets Hannah’s dad, he is a barber.