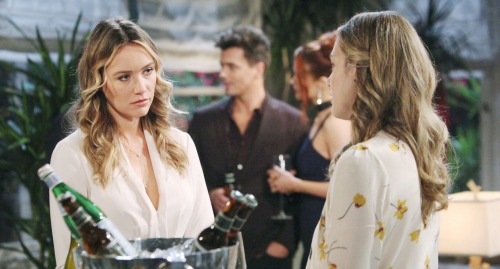 The Bold and the Beautiful (B&B) spoilers tease that alarm bells will sound for Liam Spencer (Scott Clifton). He’ll learn something surprising during the week of March 4-8, and it’ll bring a strange feeling. After Hope Spencer (Annika Noelle) meets Florence “Flo” Fulton (Katrina Bowden) and quickly forms a bond, Liam will think something’s off. He’ll listen to the details and wonder what’s really up.

Hope will gush about how Flo is “Phoebe Forrester’s” (Isabella de Armas and Redford Prindiville) birth mom. She’ll be ecstatic over the chance to get to know the woman who brought this little girl into the world. Of course, B&B fans know Flo had nothing to do with that. Hope is the only birth mother here, but Hope will remain oblivious for now.

The Bold and the Beautiful spoilers say Liam will think Hope and Flo’s interaction was odd. Since Zoe Buckingham (Kiara Barnes) will be the one who introduces them, Liam will feel unsettled about how she fits in. He won’t be able to shake his hunch that there’s more to the story.

Liam fully believes Beth Spencer is dead, so it’s doubtful his suspicions will involve her at first. Instead, Liam could actually end up concerned about Steffy Forrester (Jacqueline MacInnes Wood) and what she’s gotten herself into. Liam won’t trust Flo or this adoption, which should be a crucial part of all this moving forward.

However, Wyatt Spencer’s (Darin Brooks) link to Flo could influence the situation. He may defend her since she happens to be his high school sweetheart. Wyatt will reconnect with Flo, so he’ll see all the qualities he fell in love with years ago. He might assure Liam that Flo’s a great gal and is trustworthy.

Unfortunately, Wyatt doesn’t really know Flo – not anymore. She has some good in her since she feels guilty about her actions, but she’s still deceiving Hope about the death of her child. Liam might try to believe Wyatt’s claims about Flo, but it’ll be tough to just ditch his concerns. Even Wyatt himself should get worried as Flo’s behavior grows increasingly erratic.

A dinner party debacle will make Liam believe his instincts were spot-on. Flo will bring up the baby and beg Hope not to hate her. Hope will undoubtedly be confused, but Flo will cover her blunder. Confessing could lead to a prison sentence, so Flo may act like she feels guilty for giving up her kid when Hope couldn’t keep hers. She’ll find some way to spin this and hope she can dial down the suspicions.

Liam, Hope, Wyatt and Sally Spectra (Courtney Hope) will all be on hand to watch Flo’s meltdown. There’ll only be questions initially, but Liam could become determined to get answers soon. When Flo keeps Hope close, Liam should assume there are some buried secrets.