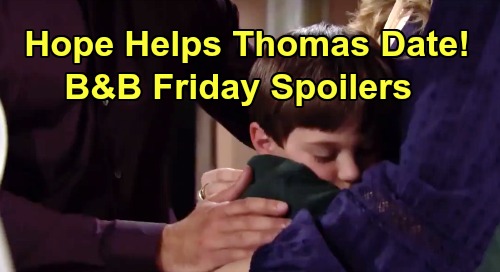 The Bold and the Beautiful spoilers for Friday, December 27, tease that Sally Spectra (Courtney Hope) will be feeling excited. As B&B viewers know, she’s working as the designer for Steffy Forrester’s (Jacqueline MacInnes Wood) new line focusing on a younger demographic. That’s exciting enough right there, but according to B&B spoilers, Sally will be feeling extra motivated about the whole experience because of the additional element of competition.

Sally just had a meeting with Steffy, during which Steffy thought that one of her design concepts was too similar to Sally’s own line that she designed for Forrester Creations. Clearly, Steffy has some lofty goals in mind for her line, and for the fashion showdown. During the showdown, she and Sally will compete directly against Hope For The Future, and that means competing against Thomas Forrester (Matthew Atkinson) and Hope Logan (Annika Noelle).

As B&B viewers know, Hope has reluctantly agreed to allow Thomas to be her designer so she can have a shot at winning the competition. That’s a situation that’s fraught with challenges due to the tense relationship between Thomas and Hope, but still Steffy and Sally know that Thomas is a talented designer who is poised to win the showdown if they don’t put in some serious effort into their designs.

Well, according to B&B spoilers, Sally will be up to the challenge, and she even feels emboldened by knowing that she is up against her former beau in the competition. Of course, since Forrester Creations only has the resources to fund one of the lines, everything’s at stake. But most importantly, Sally’s got her pride. She doesn’t want to lose to her ex, and it would be a huge victory if she won this contest.

Meanwhile, on the new episode of B&B on Friday, December 27, Thomas will have a big request for Hope. Of course, at this point, Hope is used to having to fend off Thomas’ inappropriate and unwanted advances. But this time, Thomas’ request for Hope will involve another woman…his new love interest, Zoe Buckingham (Kiara Barnes).

As B&B viewers know, Thomas wants to demonstrate for Hope that he’s moved on with Zoe, so that she’ll continue to allow him to work on her line for the fashion showdown. And what better way to show Hope that he’s moved on than to go on a hot date with Zoe? B&B spoilers say that Thomas will ask Hope to keep Douglas Forrester (Henry Joseph Samiri) for the evening while he takes Zoe on a romantic date.

Of course, Hope will probably be wondering whether the whole situation is for real, or if it’s just a ploy on Thomas’ part. Hope is still leery of Thomas’ motives and she’s been skeptical about his sudden romantic interest in Zoe. But it looks like she’ll agree to keep Douglas for the night, as B&B spoilers indicate that Thomas and Zoe will indeed go on their date.

It also appears that Hope will end up keeping Douglas for the entire night, as Thomas and Zoe will be quite preoccupied during their date. They’ll end up making love and spending the night together, and this should be readily apparent to Hope, since she’ll know that Thomas was occupied for an entire evening. And it should be apparent to Liam Spencer (Scott Clifton) as well, which should make him wonder and worry.

As B&B viewers know, Liam has enlisted Zoe in a plot to spy on Thomas and get to the bottom of whether he is still obsessed with Hope. But something tells us that Thomas and Zoe making love won’t make Liam feel better about Thomas’ orientation toward Hope. He strongly feels that Thomas still wants Hope, and it looks like he’ll now be worried about (a) the lengths Thomas is willing to go to for Hope, and (b) the possibility that Zoe’s mission is now compromised.

At any rate, it looks like Liam’s plan is going to turn into a real mess, especially if Hope ends up believing that Thomas really is over her and is now serious about Zoe. And Zoe’s ability to be objective when it comes to Thomas may be entirely shot, so one wonders if she’ll ultimately be any good to Liam in finding out what Thomas is really up to.