The Bold and the Beautiful Spoilers: Liam and Hope Fight for Douglas Custody – Furious Thomas Refuses to Give Up His Son 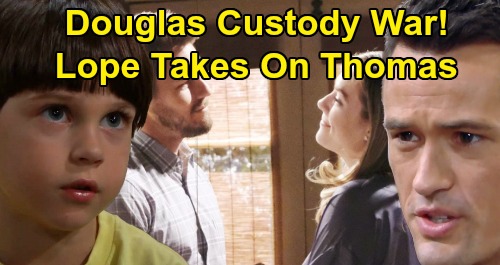 The Bold and the Beautiful (B&B) spoilers tease that a war will be declared. It’ll center around one beloved little boy and the people who want to raise him. B&B fans know Thomas Forrester (Matthew Atkinson) was downright abusive to his son throughout all the baby chaos. He berated Douglas Forrester (Henry Joseph Samiri) and encouraged him to lie about something massive.

Thomas was even willing to scare Douglas though that ghost projection. He didn’t seem to care much about the kid’s well-being. That was evident when poor Douglas put his hands up and feared Thomas would get physical. After Thomas schemed to score that visit with Douglas, he really let him have it.

However, Thomas had a moment of clarity later where he softened and apologized. The Bold and the Beautiful spoilers say Thomas will want a chance to be a good father. He’ll understand that he’s made some mistakes, but he’ll feel like Thomas needs. Now that Caroline Spencer (Linsey Godfrey) is gone, Thomas is Douglas’ only surviving parent. He’ll desperately want to remain in his son’s life.

Of course, some other B&B characters will put up a fight on that. Hope Logan (Annika Noelle) and Liam Spencer (Scott Clifton) will remain concerned about Thomas’ mental stability. They just won’t know if Thomas is capable of giving Douglas all the love he deserves. Brooke Forrester (Katherine Kelly Lang) will agree that Thomas isn’t a suitable dad for Douglas anymore.

Thomas will be appalled when they want to take Douglas away from him. He’ll promise he’s not giving Douglas up without a fight. If they can’t resolve the matter, Thomas might be headed to court with “Lope” soon. Douglas may not know what to think since he still loves his dad. At the same time, there could be some lingering fears – especially if Liam and Hope explain he’s safer with them.

The Bold and the Beautiful spoilers say Thomas will fume, especially over Liam’s part in all this. He’ll feel like Liam stole his wife and now he’s trying to steal his child. Thomas will do whatever it takes to make sure Douglas is under his roof and as far away from Liam as possible.

It looks like some hot drama’s coming up. We’ll give you updates as other B&B news emerges. Stay tuned to the CBS soap and don’t forget to check CDL often for the latest Bold and the Beautiful spoilers, updates and news.