BY Heather Hughes on May 6, 2019 | Comments: one comment
Related : Soap Opera, Spoiler, Television, The Bold and the Beautiful 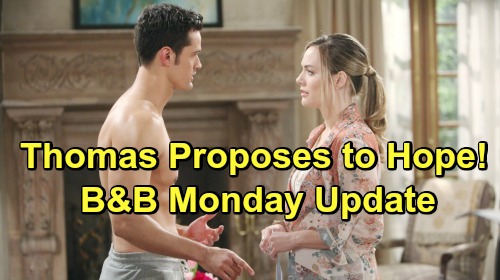 The Bold and the Beautiful (B&B) spoilers update for Monday, May 6, tease that the bombs will keep dropping on Hope Spencer (Annika Noelle). She was left reeling over that kiss Thomas Forrester (Matthew Atkinson) planted, but he isn’t done yet! Thomas will continue his push to be a family with Hope and Douglas Forrester (Henry Joseph Samiri). He’ll fight desperately to make Hope understand the great life they could have together.

Thomas will even argue that Caroline Spencer (Linsey Godfrey) picked Hope out as a replacement mother. He’ll contend that Caroline wanted Hope to fill in if she ever wasn’t able to be there for Douglas. That’ll leave Hope skeptical as she tries to figure out where all of this is coming from. Hope will think grief has made things confusing all around, but Thomas will insist that’s not true for him.

B&B spoilers say Thomas will assure Hope that he’s thinking clearly and understands exactly what he’s asking of her. He’ll make his point even stronger when he admits he kept something from back in Cabo. Hope will be taken aback by the engagement ring Thomas kept. He’ll get that Hope is currently married to Liam Spencer (Scott Clifton), but he’ll be willing to wait if he must. Thomas will insist he’s fully committed to Hope.

Other Bold and the Beautiful spoilers state that Wyatt Spencer (Darin Brooks) will demand the truth from Sally Spectra (Courtney Hope). He’ll convince her to come clean about what she’s hiding, so she’ll share what’s going on with Thomas. Sally will want Wyatt to know there’s nothing romantic going on at all. She’ll admit that Hope is the one Thomas wants and intends to get back.

Wyatt will feel deeply betrayed when he learns Sally kept something so huge from him. Thomas is going after his brother’s wife! However, Sally will assure Wyatt that Hope wouldn’t cheat on Liam, so she won’t think she had any reason to be seriously concerned.

Sally will do her best to downplay the drama, but Wyatt won’t have it. The trust between them has been shattered. Despite Sally’s attempts to reconcile, Wyatt will stand there looking like this is completely unforgivable. Perhaps Wyatt’s going to the extreme here, but he feels how he feels. Sally will just have to face the consequences – and she will when she moves out of the house on new Bold and Beautiful episodes next week, May 13-17.