The Bold and the Beautiful Spoilers: Shocking Death Keeps Hope and Steffy in the Dark – See Who Takes Baby Secret to the Grave

BY Kinsley Goldman on February 20, 2019 | Comments: one comment
Related : Soap Opera, Spoiler, Television, The Bold and the Beautiful 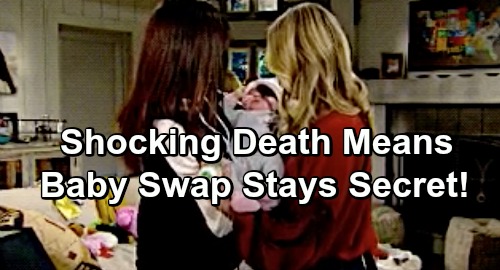 The Bold and the Beautiful (B&B) spoilers tease that the secret circle will keep growing. Dr. Reese Buckingham (Wayne Brady) put a risky plan in motion that night on Catalina Island. Once he swapped Hope Spencer’s (Annika Noelle) perfectly fine baby for a dead one, there was no turning back. Reese was in deep, so the mess was destined to get messier.

Florence “Flo” Fulton (Katrina Bowden) has already been battling guilt, but it’s only going to get worse when she meets Hope next week, February 25 – March 1. The Bold and the Beautiful spoilers say Flo’s heart will break for her. She’s partially responsible for the pain Hope’s dealing with, so that’ll almost be more than Flo can bear. There’s a good chance Flo will come close to cracking under the pressure.

However, this B&B storyline isn’t winding down just yet. That means Reese, Florence and now Zoe Buckingham (Kiara Barnes) are going to keep the baby swap secret under wraps. Since Zoe’s been sharing her suspicions with Xander Avant (Adain Bradley) along the way, it seems she’ll have to keep his mouth shut as well. Reese will just hope everyone can stay quiet and handle all the guilt.

The Bold and the Beautiful spoilers say other characters may learn the truth about “Phoebe Forrester” (Isabella de Armas and Redford Prindiville) aka Beth Spencer, but who will ultimately decide to come forward? B&B might have someone resolve to tell the secret and get killed before he or she could do it. If so, Flo would probably be the ideal choice.

Zoe doesn’t want Reese to go to prison and Xander won’t want to lose Zoe by hurting her father. It’ll be easier for them to keep quiet since they weren’t actually part of the scheme. The same goes for anyone else who’s brought in the loop. Flo helped Reese pull this off, so it could make it nearly impossible for her to stay tight-lipped indefinitely.

What if Flo decides to come clean somewhere down the line and suffers a grim fate before she has the chance? If Flo got into a car crash or some other freak accident, The Bold and the Beautiful could keep the story going.

Flo will score a new job in Los Angeles for now, but anything can happen in the weeks or months ahead. Of course we also know that Flo’s mom, Shauna Fulton (Denise Richards), is coming to join her on the new B&B episode April 3, and her arrival is due to trouble that her daughter is in.

Whatever the case, it makes sense for B&B to shake things up and have some forced silence. Killing off a character in the know would be an excellent approach. Do you think Flo or another secret-keeper will eventually take the baby swap secret to the grave?