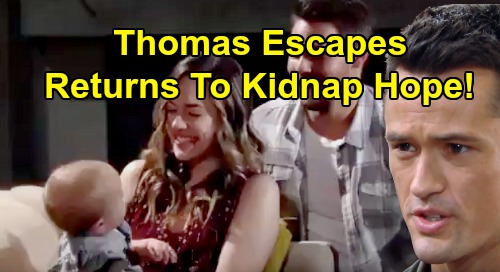 The Bold and the Beautiful (B&B) spoilers tease that Thomas Forrester’s (Matthew Atkinson) marriage has crumbled thanks to his lies and the revelation about Beth Spencer. Thomas wanted Hope to be a mother to Douglas Forrester (Henry Joseph Samiri), but this was always more about her being a wife instead. It’s clear that Thomas has an unhealthy obsession with Hope Forrester (Annika Noelle), and it’s led to some dark moves.

B&B fans can expect Thomas to seethe after his face-off with Liam Spencer (Scott Clifton). He’ll feel like all his hard work to keep things quiet was for nothing. It seems Thomas will manage to escape for the time being, which is probably for the best in terms of drama. Hope and Liam will have plenty of other things to deal with, so they might as well save most of the Thomas shockers for later.

Hope Forrester Will Get To Rip Into Her Cousin Flo Fulton

The Bold and the Beautiful spoilers say Hope will have an opportunity to rip into Florence “Flo” Fulton (Katrina Bowden). She’ll also be able to start bonding with Beth as her daughter. It’ll be different once Hope actually knows why there’s a connection. It’ll open her eyes in a really wonderful way, so Hope will be overcome with joy over her little one.

Of course, Hope will remain angry with Flo as well as Shauna Fulton (Denise Richards) for hiding the truth. Zoe Buckingham (Kiara Barnes) will eventually face Hope’s wrath, too. There’ll be loads of rage to hand out, so everyone will get his or her fair share – including Thomas, but not just yet.

The Bold and the Beautiful spoilers say Thomas just won’t be able to get Hope out of his head. Part of him may know he should leave this alone. Thomas may still have a rational side of himself that’ll realize there’s no chance Hope will want him now. She never really wanted Thomas in the first place.

However, Thomas will ignore the voice of reason and listen to a delusional one instead. He’ll make himself believe that he still has a shot with Hope. Thomas will think that if he just explains everything and convinces Hope they’re meant to be together, everything can still work out like he planned.

How will Thomas go about achieving his goal? Will he decide to kidnap Hope and Beth? Will he take them somewhere and force a dramatic rescue? Regardless, The Bold and the Beautiful spoilers say Thomas’ obsession with Hope will remain dangerous!

It sounds like even more bombshells are brewing. Will Thomas meet a bitter end as a consequence of his obsession with Hope? We’ll give you updates as other B&B news comes in. Stay tuned to the CBS soap and don’t forget to check CDL often for the latest Bold and the Beautiful spoilers, updates and news.