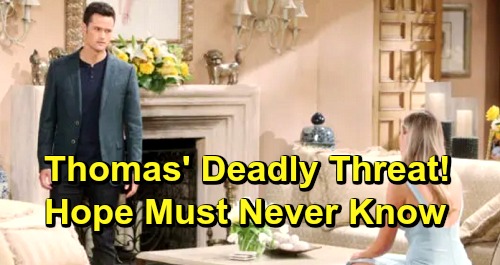 The Bold and the Beautiful (B&B) spoilers tease that Florence “Flo” Fulton (Katrina Bowden) will be accused of lying. When Flo slips up and gets backed into a corner, she’ll divulge the truth about Beth Spencer. Thomas Forrester (Matthew Atkinson) will be on the receiving end of that confession, but he’ll think Flo made up some twisted story for reasons he can’t even begin to imagine.

Thomas will fly into a rage and lash out at Flo for her part in this B&B plot. When he’s done, Thomas will need some quiet time for reflection. This is a massive secret that could turn several lives upside down. Thomas will realize how heartbroken Steffy would be to lose “Phoebe.” He’ll also know Taylor Hayes (Hunter Tylo) would face backlash for buying the story Reese sold her.

At the same time, Hope means a lot to Thomas and he’d love to see her happy again. The trouble is Thomas wants to be the one to make that happen. Giving Hope her baby back would send her straight to Liam, and he can’t have that.

The Bold and the Beautiful spoilers say Thomas will be in an impossible situation. He’ll face some serious inner conflict as he tries to decide who to tell or if he should tell at all.

Meanwhile, Flo will await Thomas’ decision along with Zoe Buckingham (Kiara Barnes) and Xander Avant (Adain Bradley). Xander may feel like this is good news. He’ll probably hope having an extra person in the mix could rev up the pressure and lead to the truth coming out. Xander will still feel like honesty is the best policy for Flo and Zoe.

Later, The Bold and the Beautiful spoilers say Thomas will approach them with his choice. It’ll be quite the bombshell since Thomas will level some threats along with it. Thomas will leave Flo, Zoe and Xander in total shock. It seems that instead of demanding their confession, Thomas will demand their silence.

After mulling it over, Thomas may take charge and insist that there can be no more spillage. He’ll likely argue that Hope absolutely CANNOT know Beth survived. This won’t be the reaction Flo and the gang thought they were going to get! As Thomas gets more and more ruthless, this storyline will take some sinister turns. The Bold and the Beautiful spoilers reveal that there will be at least one character death on the road to the ultimate baby Beth exposure.

It’s all building to a deadly twist and the ultimate big reveal. We’ll give you updates as other B&B details emerge. Stay tuned to the CBS soap and don’t forget to check CDL often for the latest Bold and the Beautiful spoilers, updates, and news.