The Bold and the Beautiful Spoilers: Friday, June 7 Update – Beth Confession Botched, Xander Leaves Liam and Hope in the Dark

BY Heather Hughes on June 7, 2019 | Comments: one comment
Related : Soap Opera, Spoiler, Television, The Bold and the Beautiful 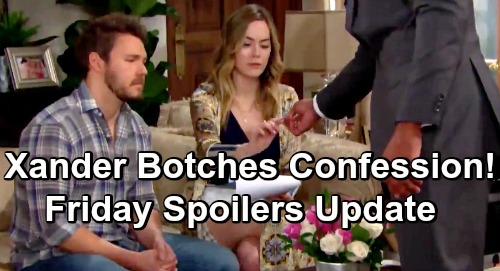 The Bold and the Beautiful (B&B) spoilers update for Friday, June 7, tease that the suspense will build as Xander Avant (Adain Bradley) prepares to blurt out the truth. Of course, preparing to tell the truth isn’t the same as actually divulging it! Florence “Flo” Fulton (Katrina Bowden) has given us plenty of fake-outs and now it’s Xander’s turn to have a change of heart.

Xander just showed up on a mission to tell Liam Spencer (Scott Clifton) and Hope Spencer (Annika Noelle) about their daughter. Beth Spencer is alive, so that news would obviously affect their marriage. Hope and Liam wouldn’t be getting an annulment if they could have their child. Losing Beth drove them down this dark and difficult path, so Xander has the chance to bring light back into their world.

However, The Bold and the Beautiful spoilers say Xander will ultimately pass up that chance. He knows he should spill the whole story, but some crucial obstacles will get in the way. For starters, Zoe Buckingham (Kiara Barnes) has a lot to lose. Xander may worry about the backlash for Zoe and reconsider at the last second.

Of course, Thomas Forrester (Matthew Atkinson) also happens to be lurking nearby. If he feels like Xander is going to mess this up for him, he won’t hesitate to drag him out. Even so, Xander could come clean if he really wanted to. It’s not like anyone will have a gun to his head forcing him to keep quiet. Simply shouting “Beth is alive” would change everything for “Lope,” but Xander will clam up.

As a result, a baffled Hope and Liam will stick to their plan. They won’t understand why Xander was so passionate about them remaining a B&B couple, but they’ll probably be too distraught to dwell on it. This is the end of the road for Liam and Hope, so they’ll make their annulment official and try to move on.

Other Bold and the Beautiful spoilers state that Zoe and Flo will do some clashing. They’ll be tired of dealing with each other, but there’s nothing they can do about their necessary bond. This awful secret has forced them into a pact, so they’re in this together – like it or not!

It sounds like some gripping drama’s ahead. We’ll give you updates as other B&B details emerge. Stay tuned to the CBS soap and don’t forget to check CDL often for the latest Bold and the Beautiful spoilers, updates, and news.