The Bold and the Beautiful Spoilers: Tuesday, May 14 – Flo Learns She Has A New Home – Katie Enlists Shauna To Seduce Bill

BY hellodrdavis on May 13, 2019 | Comments: 2 comments
Related : Soap Opera, Spoiler, Television, The Bold and the Beautiful 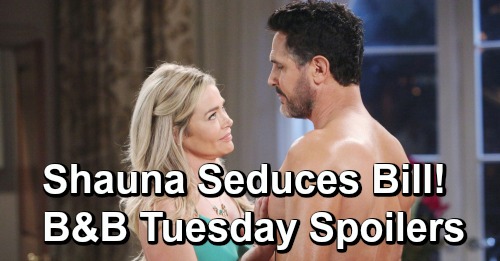 The Bold and the Beautiful (B&B) spoilers for Tuesday, May 14, tease that Brooke Forrester (Katherine Kelly Lang) will be on hand to offer support to Katie Logan (Heather Tom). Katie was all set to accept Bill Spencer’s (Don Diamont) marriage proposal after having a long talk with Brooke and Donna Logan (Jennifer Gareis). But when she tracked Bill down, she found him sharing drinks with Shauna Fulton (Denise Spencer).

As B&B viewers know, that gave Katie pause about accepting Bill’s proposal. She realized that she needed to find out first if Bill was really loyal to her, or whether he was reverting back to his philandering ways. Katie wants to believe that Bill has really changed, but she wants to be sure.

And that’s where Shauna will come in. The Bold and the Beautiful spoilers say that Katie will gather Shauna and Brooke together and discuss her big plan to test Bill’s loyalty. She’ll ask Bill’s old flame for a big favor…she’ll want Shauna to pretend to seduce Bill, to see if Bill takes the bait or shuts the whole thing down.

It looks like Brooke will have some reservations about the whole plan, but Shauna will be in. Shauna doesn’t really have any ill will toward Bill anymore, but it seems that she’ll be curious about how the whole situation will play out, and she’ll agree to Katie’s plan.

Meanwhile, on the new B&B episode on Tuesday, May 14, Florence “Flo” Fulton (Katrina Bowden) and her mother will find themselves with new living arrangements. As B&B viewers know, Flo and Shauna have been staying in Reese Buckingham’s (Wayne Brady) place, but now Quinn Forrester (Rena Sofer) has convinced Eric Forrester (John McCook) to let Flo and Shauna move into the Forrester mansion.

Of course, Shauna was ecstatic about the idea of moving in with Quinn and Eric, and on Tuesday’s episode she’ll fill in Flo about the development. Flo will arrive at the Forrester estate expecting some big news, but she’ll probably be blown away when she learns that she’ll soon have new digs!

It looks like Flo will have some news to impart on her mother and Quinn as well. She’s just accepted a date invitation from Wyatt Spencer (Darin Brooks), and that means that Quinn and Shauna are going to be thrilled. They both want Flo and Wyatt together, so the fact that they’re going on an official date will be music to their ears.