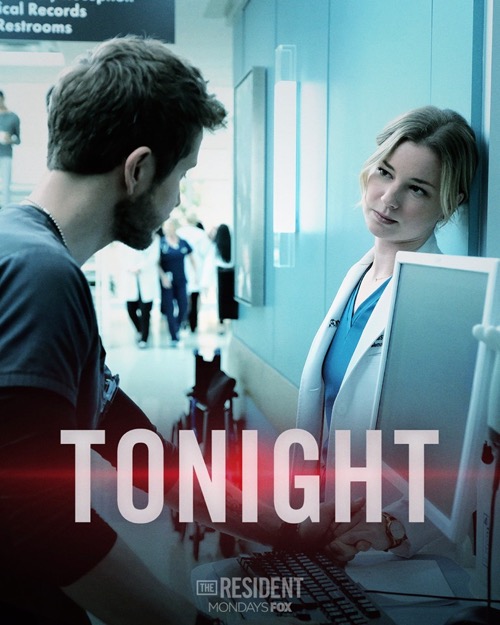 Tonight on FOX their new medical drama The Resident airs with an all-new Monday, May 6, 2019, episode and we have your The Resident recap below.  On tonight’s The Resident season 2 episode 23, “The Befriended”  as per the FOX synopsis, “In an effort to save Chastain, Bell considers selling the hospital to a conglomerate, but Kit tries to make him see that the negatives will outweigh the positives. With Conrad’s help, Nic tracks down Kyle and pleads for him to reconsider donating a kidney to Jessie. Meanwhile, Mina voices her concern to Austin when Shira is assigned to Micah’s surgery and Devon fights for the care of a patient whom the doctors suspect is uninsured..”

The Resident season 2 episode 23 airs at 8 PM – 9 PM ET on FOX. Make sure to bookmark this spot and come back for our The Resident recap! While you wait for the recap make sure to check out all our television recaps, news, spoilers & more!

Nic lay in bed thinking about consoling her sister, Jesse, and fighting with her father Kyle over her failing kidneys. Conrad consoles her. She recalls them dancing, kissing, having fun. She gets up and heads to talk to him. They sit and talk on the couch. She admits she has trouble accepting help. She knows that. She also wants a marriage and children. But she can’t be rushed. Conrad agrees to give her time and not rush her. They kiss.

Back at the hospital, Bell meets with a group of hospital heads. He is trying to get them to add Chastain to their circle of connected hospitals. They mention Chastain’s recent PR problems. They decide to think about it.

Mica is at Chastain for surgery. Mina wants to assist. AJ thinks it is too soon for her. She disagrees. In the ED, Irving and Devon work on a new admit, a man with no ID who cannot communicate properly. He appears to have Dementia. Nic meets with an organ coordinator. They talk about Nic’s sister. A man arrives at the information desk looking for Shira Smook.

Nic and Conrad assess Jesse who is having trouble breathing. Her heart is now failing. They talk alone away from Jesse. She needs a donor and the only choice they have is Kyle. Conrad tells Nic his father is looking for him with a PI.

Conrad looks at the man in the ED and figures out he has expressive aphasia. They don’t know if he is insured. Conrad doesn’t care. They need to get him to CT.

AJ assesses Mica. He has a 2nd-degree heart block. A quick surgery, AJ tells him. Just a pacemaker. A woman comes in. It looks as though Mica has already moved on. A man confronts Shira making a scene. She tells him to leave loudly. Mina overhears. Then Shira tells him quietly she will meet him in an hour.

Nic tracks down Kyle. She tells him about Jesse’s heart issues. They only have days or weeks. He admits he is scared. He can’t do it. Nic tells him he will see him at Jesse’s funeral. She leaves.

Conrad and Devon look at the unknown man’s CT scan. He definitely has aphasia and needs care. They are going to have to talk to Bell. Meanwhile, Nic meets with Jesse. She tells Jesse how Kyle is a match but he is scared. Jesse isn’t that angry. She can understand, she is a lot like him. She forgives him and wants Nic to do the same.

Mina talks to Shira who shares she will also be in the OR on Mica’s surgery. Mina asks Aj to take her off, she senses something wrong with Shira. AJ agrees and then tells her about Mica’s new girl. Her reaction makes him take Mina off the surgery.

Kyle shows up at Chastain. He wants to help Jesse. Nic hugs him.

Nic meets with the surgeons, Jesse and their dad about what is to come. Bell is asked to spend time with the unknown man so that he will change his mind about helping him.

Outside, Shira’s supposed ex breaks into her car. Meanwhile, Kyle is in a hospital bed. He is scared when they try to start an IV. Nic has to console him. Outside, the police arrive after one of the surgeons calls them after seeing a man breaking into a car. Inside the hospital, Shira shoots up. Mina comes in. She tells Mina she is just tired.

Kyle is wheeled into surgery. He wants to tell Nic something. She tells him he will be fine. Shira comes up and introduces herself. She will be his anesthesiologist.

The surgeon comes in with the police to see Bell. They have a problem. Shira collapses. She takes out Kyle’s ventilation line and IV line. The surgeon hits an artery in error. They struggle to get the tubes back in while Bell rushes to the OR. Shira isn’t breathing on the floor. Conrad and Nic rush in to help. They stabilize him. Shira is wheeled to another OR. Bell is told about her outside. They bring her back to with Narcan. The police arrest her.

AJ and Mina get Jesse’s new kidney in and running after a brief scare with her blood pressure. Nic watches with relief.

Bell approves the surgery of the unknown man. He and Kitt sit outs the man’s room. She is happy he said yes. She admits she is back with her ex but still thinks he is a good man.

Conrad watches over Kyle and Jesse so Nic can rest. Meanwhile, Mina watches from afar as Mica kisses his new girl. AJ comes up. Mina makes it clear she is fine as she asks what they have next.

Bell and Devon visit the unknown man post surgery. He tells them his name and about his wife.

Bell meets with the association head for the Red Rock Group. She tells him they want to accept Chastain but he will have his authority curtailed and he has no choice. She tells him to sign.

Conrad works on an unknown member of Nic’s family. They are coding. Mina won’t let her in the room. Conrad stops working with a sad look on his face.