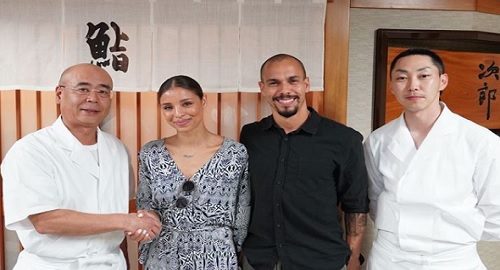 The Young and the Restless (Y&R) spoilers reveal that two CBS soap stars just took an amazing trip together. Y&R fans know Brytni Sarpy as Elena Dawson and Bryton James as Devon Hamilton in Genoa City. They sparkle together onscreen, but could there be some magic happening offscreen, too? There have already been some hints that the two of them might be dating, and the last one came in the form of an exciting adventure.

Sarpy celebrated her 32nd birthday on September 21, so James did something special to honor it. He accompanied Sarpy on the trip of a lifetime as they explored some fun spots in Japan. Both Sarpy and James shared great pics on their Instagram accounts and acknowledged what a wonderful time they had.

“The best trip with the best human,” James said. “Thank you for sharing the celebration of such a special year with me @brytni.” Sarpy replied, “EPIC adventure… here’s to many more.” They both included heart emojis as part of their sweet exchange. That certainly sounds like they’ve become a couple – and most of us can agree they make an adorable one!

Of course, the trip itself seemingly serves as evidence of their couple status. It’d be kind of unusual for them to go all the way to Japan together as part of a friendly trip, especially since this was Sarpy’s birthday celebration. Plus, plenty of people assumed this was a couple announcement and congratulated the duo in the comments. No one was corrected, which adds fuel to the speculation that they’re an item.

This also backs up a Soap Opera Digest blind item from a while back. They spilled that there was a good reason one popular pairing was sizzling and pointed to a romance behind the scenes, too. That could’ve been about any couple on any of the four soaps, but it looks like we have our answer now. James and Sarpy always light up the screen, so they apparently feel the chemistry Young and the Restless viewers are seeing.

Regardless, The Young and the Restless spoilers say there’s much more drama ahead for Devon and Elena. Their storyline’s heating up thanks to Amanda Sinclair’s (Mishael Morgan) chaos, and things are only going to get hotter from here! We’ll give you updates as other Y&R news comes in. Stay tuned to the CBS soap and don’t forget to check CDL often for the latest Young and the Restless spoilers, updates and news.

Dreaming of dreaming in Kyoto… hands down my favorite place in the world, so far. @suirankyoto thank you again for your exceptional care and making me feel at home… 🖤