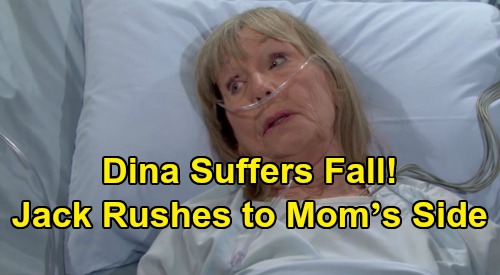 The Young and the Restless (Y&R) spoilers tease that Jack Abbott (Peter Bergman) and Traci Abbott (Beth Maitland) will be eager to dust off some old stories and uncover new secrets. They’re super excited about the passion project they’ve teamed up on. Jack had the idea of writing a book about their family, so Traci’s all in on making this dream a reality.

Unfortunately, a sudden crisis will hit during the week of October 14-18. It’ll put the book on hold briefly as Jack steps up to handle it. The Young and the Restless spoilers say the trouble will start when a call comes in. That call will bring urgent news from Dina Mergeron’s (Marla Adams) memory care center. After Dina falls at the facility, her family will be notified so they can come check on her.

Jack may fear Dina will be overwhelmed if they all show up, but he’ll want someone to be there for her in her time of need. Dina apparently won’t suffer severe injuries, but she may be a bit shaken. Luckily, Jack’s great with his mom and knows just how to make her comfortable – even when she doesn’t remember who he is.

On the bright side, Dina did have a flash of recognition during their last chat. Her memories aren’t completely gone yet, so it turns out she’ll offer an intriguing clue about the past. The Young and the Restless spoilers say Jack will be puzzled when Dina mentions a name. She’ll keep talking about Stuart, so Jack will wonder who in the world Dina’s referring to.

Of course, Jack will consider the possibility that Dina’s babbling about someone she made up or someone she knows now. Dina isn’t exactly a reliable source for anything these days. Even so, Dina’s insistence will make Jack think he should look into this. He’ll mention Stuart to Traci, who’ll launch a little investigation. Traci will feel like they may be on the verge of something interesting for their book.

Y&R spoilers say Traci’s search will yield results. She’ll eventually show Jack an old photo of Dina with several men at a club. One of those men will be named Stuart Brooks, who owned the local newspaper. You can bet Traci and Jack will follow up on this lead. They didn’t expect Dina to be able to contribute to the book, but it looks like she will in a roundabout way.

Some shocking twists are coming up in this storyline, so don’t miss what’s in store. We’ll give you updates as other Y&R details emerge. Stay tuned to the CBS soap and don’t forget check CDL often for the latest Young and the Restless spoilers, updates and news.