The Young and the Restless Spoilers: Friday, May 3 – Victor Soothes Adam – Sharon and Rey’s Wild Discovery, The Moustache Confesses

BY Heather Hughes on May 2, 2019 | Comments: one comment
Related : Soap Opera, Spoiler, Television, The Young and the Restless 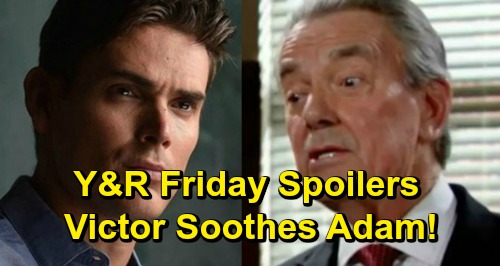 The Young and the Restless (Y&R) spoilers for Friday, May 3, tease that some shockers will build to a big cliffhanger. Sharon Newman (Sharon Case) fears whatever she’s gotten herself into with Rey Rosales (Jordi Vilasuso) could be risky, but she’s far too curious to back out now. They’re both determined to find out what Victor Newman (Eric Braeden) is hiding, so it’ll be time to investigate on Friday.

It turns out Sharon and Rey won’t even have to do much digging. The Young and the Restless spoilers say a discovery will be staring them right in the face soon enough. Y&R fans can expect Rey and Sharon to hit the jackpot in several ways, so Victor will have some explaining to do. His mystery patient is in a fragile state of mind, which means he can’t have “Shey” butting in and making things worse.

Of course, this mystery patient is none other than Adam Newman (Mark Grossman). In Thursday’s episode, Sharon looks up the psychiatrist The Moustache hired online and determines that he specializes in memory retrieval. Victor also meets with that psychiatrist, who warns that Victor is expecting too much from the patient. He’s overloading him with too much information far too fast.

Nevertheless, Victor is a man who knows what he wants. He’s stubborn and obviously wants his son back to his old self as soon as possible. After Victor tries to soothe Adam on Friday, he’ll have to deal with Sharon and Rey. They’ll interrogate Victor about his shady moves and why he’s keeping Nikki Newman (Melody Thomas Scott) out of the loop.

Thanks to his surprise visitors, Victor will be forced to share his big secret soon. He may not divulge the whole story just yet, but he’ll have to offer something. The Young and the Restless spoilers say Nikki will eventually get updates, so she’ll decide it’s time for a trip to Las Vegas next week, May 6-10.

Why didn’t Victor want his family to know about Adam’s survival? It’s possible he feared the memory retrieval wouldn’t work and didn’t want to shake things up unnecessarily. Adam has apparently been struggling with this, so Victor might’ve thought the Newman clan would bombard him and make matters worse.

Regardless, Victor will have hope that Adam will be back to normal any day now. His revelation will lead Sharon on a trip down memory lane, so stay tuned. We’ll keep you posted as other Y&R news comes in. Stick with the CBS soap and don’t forget to check CDL often for the latest Young and the Restless spoilers, updates, and news.