BY Heather Hughes on January 14, 2019 | Comments: one comment
Related : Soap Opera, Spoiler, Television, The Young and the Restless 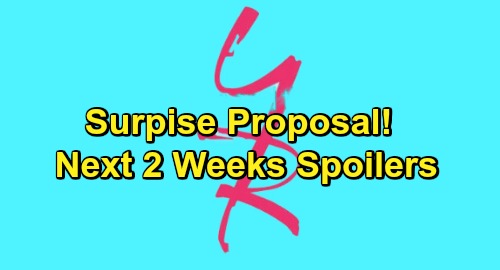 The Young and the Restless (Y&R) spoilers for the next two weeks tease that some Genoa City bombshells are brewing. During the week of January 14-18, Mia Rosales (Noemi Gonzalez) will be caught between her two favorite brothers. She’s married to Rey Rosales (Jordi Vilasuso), longing for Arturo Rosales (Jason Canela) and on the verge of putting herself back in the same old jam.

Rey and Mia’s marriage broke up because she had an affair with Arturo, her previous love. Now that Mia and Arturo’s connection is bubbling up again, it’ll freak Arturo out and send him straight to see Abby Newman (Melissa Ordway). He’ll pipe up about how much he wants a future with Abby, but this seems like a desperate attempt to distance himself from Mia.

As for Rey, he’ll continue to battle feelings for Sharon Newman (Sharon Case) and doubts from Mia. Lack of trust could easily tear this Rosales relationship apart. Over with Nikki Newman (Melody Thomas Scott), she’ll get some help from Nick Newman (Joshua Morrow). He won’t want Nikki to stress over the J.T. Hellstrom (Thad Luckinbill) case and her role in his death.

Nick will vow to take care of this, so he’ll try with Victor Newman’s (Eric Braeden) help. However, a disagreement could lead Nick to take matters into his own hands. Will Nick make a bogus confession to free Victor and put him back home to comfort Nikki? The Young and the Restless spoilers say Nikki will also have a spooky run-in. She’ll point a gun on someone entering her home, so expect some hot drama.

Thanks to doubts about their current romances, Cane Ashby (Daniel Goddard) and Victoria Newman (Amelia Heinle) will end up having another make-out session. They’ll almost get carried away on the sofa, but an angry Billy Abbott (Jason Thompson) will stop them in their tracks.

Kerry Johnson (Alice Hunter) will also have a hypodermic needle she’s trying to hide. She’ll deliver an explanation, but will Jack Abbott (Peter Bergman) buy it? The Young and the Restless spoilers say things could blow up in Kerry’s face during the week of January 21-25. Kerry’s lie will bring a confrontation, so Jack may call Kerry out on the fact that she’s got a secret.

Back with Arturo, he’ll have a special surprise for Abby. Will he get even more spooked about Mia and decide to propose? Arturo has never been big on the idea of marriage, so Abby would certainly be stunned if he dropped to one knee and popped the question.

Other Y&R spoilers say Phyllis Summers (Gina Tognoni) will get grilled. Nick will want some answers, so he may figure out that she’s part of the J.T. cover-up. Despite Nikki’s best efforts to leave Phyllis and Sharon out of it, they’re both face backlash for their deception eventually.

Finally, The Young and the Restless fans will see some secret spillage. Billy will share a shocker, so he’ll probably tell somebody about witnessing Cane and Victoria’s lip lock. Will this be a vengeful move? Will the news spread like wildfire to Lily?

We’ll give you updates as other details emerge. Stick with Y&R and don’t forget to check CDL often for the latest Young and the Restless spoilers, updates, and news.