BY Heather Hughes on February 6, 2019 | Comments: one comment
Related : Soap Opera, Spoiler, Television, The Young and the Restless 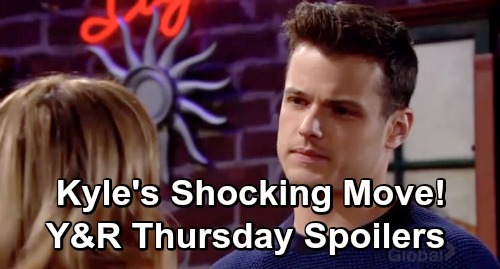 The Young and the Restless (Y&R) spoilers for Thursday, February 7, tease that Victor Newman (Eric Braeden) and Nikki Newman (Melody Thomas Scott) will discuss the next phase of the plan. They’ve been dealing with plenty of drama thanks to the murder charges and tormentor chaos. Unfortunately, their problems are about to get even worse.

Sharon Newman (Sharon Case) discovers shocking evidence and tells Nick Newman (Joshua Morrow) on Wednesday, so Nick will provide updates on Thursday. He’ll give his parents the heads-up on what’s ahead. Since Sharon had to do her job and hand over an incriminating audio file, Rey Rosales (Jordi Vilasuso) will have some extra ammunition against Victor.

Nick could be charged as an accessory due to the content of this recording. If nothing else, he could be forced to testify. It’s not news Victor and Nikki want to hear, but it’s news they need to hear. They have to be prepared for whatever Christine Williams (Lauralee Bell) and Rey throw at them.

Y&R spoilers say Victor and Nikki will work out their next move. Nikki will undoubtedly want to come clean and stop this nightmare. Of course, Victor won’t be on board with that. He may remind Nikki to keep quiet and let him handle this. Since there’s no body, Victor still has a chance of getting off the hook.

It looks like Nikki will abandon their agreement on Friday’s new Y&R episode, February 8, but Victor will try to stay in control for now. Over with Nick, he’ll lean on Sharon for support. Thursday’s episode will bring some warm “Shick” moments, so Phyllis Summers (Gina Tognoni) may not be too happy about that.

However, what Phyllis doesn’t know won’t hurt her. Nick may be able to hide this little bonding session and avoid tension. Across town, Kyle Abbott (Michael Mealor) will be frustrated over Summer Newman’s (Hunter King) meddling and Lola Rosales’ (Sasha Calle) lack of trust. Kyle is annoyed with Summer’s constant pursuit of him, but he also doesn’t understand what the sex holdup is all about with Lola.

Other Young and the Restless spoilers say Kyle will rush to his own defense on Thursday. Maybe Summer will blame him for how he handled things after Wednesday’s “Kola” blowup. Regardless, Kyle seems poised for an explosive outburst.

This will lead to some sort of physical interaction between the attracted exes. Since Kyle isn’t the kind of guy who’d hit a woman, we can probably assume that means angry sex or at least a rage-filled kiss. One way or another, Kyle just might betray Lola and make a bigger mess than before!