BY Heather Hughes on April 9, 2019 | Comments: one comment
Related : Soap Opera, Spoiler, Television, The Young and the Restless 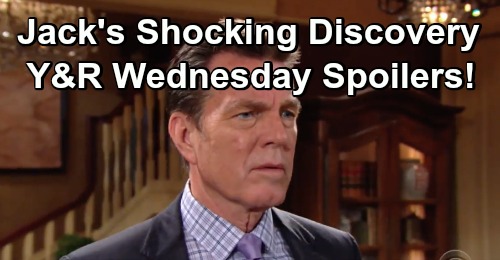 The Young and the Restless (Y&R) spoilers for Wednesday, April 10, tease that we’ll get back to the drama in Las Vegas. Billy Abbott (Jason Thompson) has been pushing Victoria Newman (Amelia Heinle) to reunite with him and return to Genoa City, but they have some business to take care of first. There’s a mystery to uncover, so Billy and Victoria will follow some intriguing clues.

Brandon Rose (Mitch Eakins) told Victoria that he spotted Victor Newman (Eric Braeden) at a high-stakes poker game, but Vic wasn’t gambling. Victor was just speaking with a man at one of the tables, so that naturally left Victoria curious. She tried to brush it off, but Brandon texted about another game that’s coming up. This gives Victoria and Billy a chance to look into what Victor’s up to.

The Young and the Restless spoilers say Billy’s old poker rival will be on hand. Sinead (Lira Kellerman) will make an appearance on Wednesday, so she may be able to point Billy and Victoria in the right direction. Of course, Sinead will also tempt Billy to gamble, but Victoria will be there to keep him on track. Billy certainly doesn’t need to blow his recovery and head down a dark path again.

Victoria, however, will take quite a risk. Perhaps she’ll put up some big money in hopes of cracking the Victor case. Regardless, Y&R spoilers state that Victoria will walk away with a major victory. She’ll be one step closer to the truth about Victor’s strange activities, which might involve a search for presumed dead Adam Newman (Mark Grossman).

Other Young and the Restless spoilers say Jack Abbott (Peter Bergman) will battle confusion. On Tuesday, Ashley Abbott (Eileen Davidson) unveils a lifestyle brand that’s almost identical to Jack’s planned one. That means Jack will have a mystery of his own to ponder on Wednesday. He’ll have to figure out who leaked this crucial information to Ashley, but he’s in for a shock.

After questioning his family, Jack will notice something odd about the gift basket Ashley had delivered. He’ll open one of the packages and pull out a listening device, so that’s how Ashley scooped up Jabot’s strategy. Once Jack confirms that Ashley stole from Jabot once again, he’ll realize this is indeed war. Jack will be prepared to play just as dirty as Ashley if that’s what it takes.

Finally, Sean Dominic will debut as Dr. Nate Hastings, Jr. This Nate recast will take over for Brooks Darnell, so it should be interesting to see Dominic’s fresh spin on the role. We’ll give you updates as other Y&R news comes in. Stay tuned to the CBS soap and don’t forget to check CDL often for the latest Young and the Restless spoilers, updates, and news.