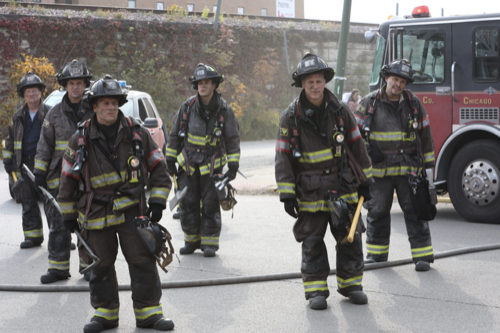 Tonight’s Chicago Fire season 9 episode 1 looks like it is going to be great and you won’t want to miss it.   While you’re waiting for our recap make sure to check out all our Chicago Fire recaps, news, spoilers & more, right here!

We see Joe running, he gets his fever checked before going inside to work, he shows up late and apologizes. It is Gianna Mackey’s first day, she grew up on the same block as Joe. Chief tells Gianna that it looks like she is going to fit right in, he ends the meeting.

Kidd wants to continue Girls on Fire, but the pandemic is making it tough. Cruz introduces Mackey to everyone and says she will be working alongside Brett. The alarm goes off, time to get to work. Brett and Mackey have masks on, they go inside an apartment and find a man passed out, it looks like an overdose. All of a sudden, a man puts a gun to Brett’s head and tells her that if the other man dies, so does she. Brett tells him to put the gun down, they can’t do anything until he puts it down.

He threatens to shoot Mackey, Brett tries to calm him down. Brett turns to the man who is now foaming at the mouth, she gives him an injection. Brett is trying to concentrate, the gun is still pointed at her head. Brett tells the guy holding the gun that his brother is not responding and if they don’t go, he is going to die. She tells him to do what he wants, she is taking him to the hospital; she totally ignores that he is pointing a gun at her. The man tries to run off the ambulance, but they make it away safe.

Brett and Mackey are back at the station, Mackey tells Casey that Brett was cool as a cucumber. Cruz sees Mackey and asks if she is ok, she says she is fine and Brett handled it well. Then he tells her that she is going to love working there, she tells him to bring it down three notches, she is in it for the long haul.

Kidd tells Severide that she is frustrated that Girls on Fire is on ice. She says she is going to break through on this if it is the last thing that she does. He tells her that he is proud of her.

Chief just got news from Chicago Med, that overdose that Brett and Mackey took on, unfortunately, his heart gave out, they couldn’t revive him. They are looking for a brother who threatened them. Joe Halleck was the man who threatened them, he is the older brother and he has a record. Chief wants to give the girls a break, they both say no, Brett says it is not the first time she has been threatened and it won’t be the last.

Chief tells Kidd that she can resume Girls on Fire, keep it outside, and only ten girls at a time. He asks her how she pulled that off, she says perseverance, ask Severide, he has watched every Bachelorette episode with her.

Brett leaves the station and Joe Halleck is in a car across the street watching her. She makes it to her apartment and finds the door open, she backs away. She waits for Casey to show up, he opens the door and turns on the lights. He looks around and finds nothing, he tells her that it doesn’t look like anyone was there. Then he asks her for an extra pillow and a blanket, he is staying there until they have Joe Halleck in custody. She thanks him and he tells her that she doesn’t have a choice. They play games to pass the time. All of a sudden, it gets a little awkward, she tells him that he can leave, he says no.

Casey gets home, he tells Severide that he stayed over at Brett’s house to make sure she was safe.

The alarm goes off, the team leaves the station. It’s a fire in a building that is used as a photography studio and there may be a dozen people still inside. The fire is burning and you can hear people calling for help. Outside, Brett and Mackey are taking care of the wounded. Chief calls Casey for a report, he answers while he tries to save some more people.

There is an explosion in a building, Severide went into one of the rooms and Kidd is calling for him, he doesn’t answer. We see him on the ground, Kidd calls Chief and tells him that Severide is down and she cannot get to him. Chief calls on everyone to evacuate. Kidd finally got to Severide, his mask fell off, she gets it on and he asks her what took her so long. Chief has everyone out and takes a deep sigh of relief.

Back at the station, Chief tells Kidd that there are not enough women of color in leadership positions, and he would like to see her in one as a lieutenant. She is courageous, intelligent, fierce, and honorable; the very definition of a leader. Kidd tells Severide about her conversation with Chief, he says he is there to help 24/7 day or night.

The alarm goes off, Brett is driving the ambulance with Mackey in the passenger seat when Joe Halleck tries to drive them off the road. He hits them again and this time the ambulance spins out of control and on its side.