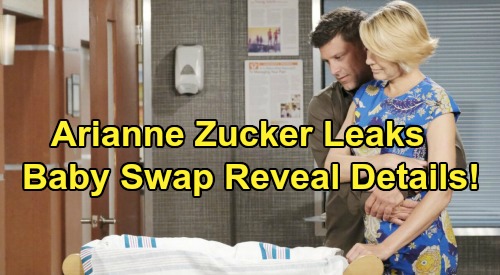 Days of Our Lives (DOOL) spoilers reveal that Nicole Walker (Arianne Zucker) will find herself in familiar territory. Part of her may wish she’d been able to stay out of the loop, but there’s no putting the cat back in the bag. Nicole is putting together the clues regarding the baby switch that happened during the time jump year. As a result, Nicole is bound to end up with a doozy of a secret to either spill or keep.

In an interview with TV Insider, Arianne Zucker spoke about Nicole’s dilemma and offered some hints about what Nicole will do next. Days of Our Lives spoilers say Nicole will seek proof that Mackenzie “Mickey” Horton is really Rachel DiMera Black. What happens from there? Will Nicole tell the truth or keep the secret to protect Eric Brady (Greg Vaughan), who believes he’s Mickey’s father?

“Nicole has been shifting to the sides of being more balanced than she used to be,” Zucker admitted. “She has Eric in her life. She doesn’t want to screw that up.” Zucker went on to say it was difficult for Nicole to once again land in the middle of something like this. It’s an unfortunate situation for Nicole, but she’ll have to decide whether she’s going to come clean or stay quiet.

Based on another one of Zucker’s comments, Nicole will indeed make a confession. “Nicole has been caught up so many times in doing the wrong thing,” Zucker said. “This time it’s about doing the right thing.” That’s pretty clear-cut that Nicole’s going to blow this baby switch secret wide open. If Nicole’s going to do the right thing, she’ll have to reveal that Mickey is Rachel. There’s just no way around it.

Of course, there could be some twists and turns before DOOL’s big reveal happens. Days of Our Lives spoilers say Xander Kiriakis (Paul Telfer) won’t be pleased by Nicole’s detective work. He’ll freak as Nicole prepares to drop this bomb and will tell Victor Kiriakis (John Aniston) that Nicole’s onto them.

It’ll be interesting to see what Xander and Victor decide to do about that! Nicole could face an obstacle or two as she gets ready to reveal the baby swap shocker. However, Days spoilers say the truth will come out in the end. Zucker herself seemingly confirmed that Nicole would be the one to expose the secret. It’s good that Nicole will be honest with Eric and avoid destroying their family.

As other updates become available, CDL will have the latest Days news for you. Are you excited to see the truth about Mickey revealed? DOOL fans won’t want to miss all our hot Days of Our Lives spoilers, news and updates, so check back often.