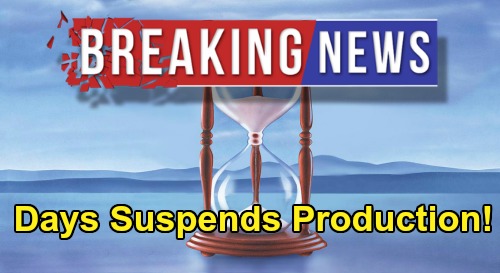 Days of Our Lives spoilers reveal that the soap is temporarily halting production due to the coronavirus emergency, which means no new DOOL episodes are being taped. The news was shared by Stephen Nichols (Steve “Patch” Johnson and brain-chipped Stefano DiMera) and Mary Beth Evans (Dr. Kayla Brady). Find out how long they are suspending production and if it will affect new episodes from airing.

On Friday, Nichols and Evans posted a video on Instagram making an important announcement. Initially, they advised everyone to stay safe and take precautions due to the coronavirus covid-19 pandemic. Nichols advised fans to wash their hands, be extra vigilant in what they touch and to keep a safe distance from others.

As the video went on, the two soap stars revealed that they worked on set during this past week, but they will not be filming during the week of March 16, 2020. Nichols admitted that they don’t know when they will be working after that.

Days of Our Lives spoilers reveal that while there is no work when production will begin again, fans don’t have to worry about missing an episode. The soap films six to eight months in advance, so a temporary halt in production will not affect current or upcoming episodes from airing.

Days of Our Lives Spoilers: Other Soaps Stop Filming

The NBC soap is not the only one to announce they are taking precautions and halting production. In order to help prevent the spread of coronavirus, others have also stopped filming. General Hospital will not be filming new scenes until mid-April.

Even though DOOL films so many months in advance that a temporary halt in production won’t affect new episodes, the same cannot be said for GH. Their span between filming and airing is much shorter.

There is a long list of television shows that have made similar announcements. However, there is no news on whether The Bold and the Beautiful and The Young and the Restless will follow suit. Due to the public’s concern about the coronavirus infection and how fast it is spreading across the world, we expect B&B and Y&R to be the next ones to send their cast and crews home.

What do you think of Days of Our Lives stopping production due to the coronavirus pandemic? Do you believe that they are making the right decision and putting the lives of their cast and crew first? We will keep you informed of any updates or changes as the information becomes available.

Be sure to catch up on everything happening with DOOL right now. Come back to CDL often for Days of Our Lives spoilers, news, and updates!