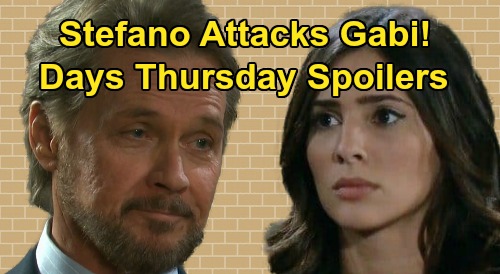 Days of Our Lives (DOOL) spoilers for Thursday, February 27, tease that Gabi Hernandez (Camila Banus) will walk out of the Salem PD and take her miserable new beginning. As Chad DiMera (Billy Flynn) pointed out, Gabi’s a town pariah and doesn’t much left to bring her happiness.

However, Gabi will have her freedom and her daughter, Arianna Horton (Sydney Brower). She’s come back from nothing before and feels confident she can do it again.

What Gabi isn’t counting on is a surprise lurker at the DiMera mansion. Stefano DiMera aka Steve Johnson (Stephen Nichols) just appeared there, so he should be waiting to give Gabi a shock.

In fact, Days of Our Lives spoilers say Gabi will get attacked! It looks like Stefano will strike Gabi somehow and make sure he avoids being taken into custody. Maggie Kiriakis (Suzanne Rogers), on the other hand, just arrived at the police station to turn herself in. That also means telling Sarah Horton (Linsey Godfrey) and Eric Brady (Greg Vaughan) the whole ugly story.

Eric and Sarah just got fantastic news about Mackenzie “Mickey” Horton. They hate that Gabi’s going free, but it’s worth it to them since Mickey has a chance at survival. Sadly, DOOL spoilers say some difficult updates will follow as Maggie confesses. She’ll leave Sarah floored and heartbroken for her mother, who just remembered killing Adrienne Kiriakis (Judi Evans).

Of course, there’s an even worse layer to this story – one that Victor Kiriakis (John Aniston) and Xander Kiriakis (Paul Telfer) definitely don’t want revealed. It’s bad enough that Maggie knows she killed a friend, but she would be devastated if she knew she killed her own grandchild.

Mickey is actually Kristen DiMera’s (Stacy Haiduk) baby with Brady Black (Eric Martsolf), so Xander and Victor will hope to keep the swap under wraps. As for Justin Kiriakis (Wally Kurth), Days spoilers say he’ll be brought up to speed by Sonny Kiriakis (Freddie Smith). Justin will eventually make his way to the Salem PD, where Maggie will deliver a sincere apology.

While Maggie tells Justin how sorry she is, Will Horton (Chandler Massey) will be released from prison and show up at the Kiriakis mansion. He’ll stun Sonny with his arrival, but it won’t be long until they begin talking. They’ve got a lot to sort out, but Will and Sonny will hope this can be a fresh start.

At Statesville, Ben Weston (Robert Scott Wilson) will prepare for his death. Days of Our Lives spoilers say Ben will try to come to grips with his looming lethal injection. There’s nothing he can do to avoid his fate, but Ciara Brady (Victoria Konefal) will work hard to save her love!

It sounds like some great Days drama’s ahead. As other DOOL news emerges, be sure to check back in for more updates. CDL will have lots of Days of Our Lives spoilers to pass along.