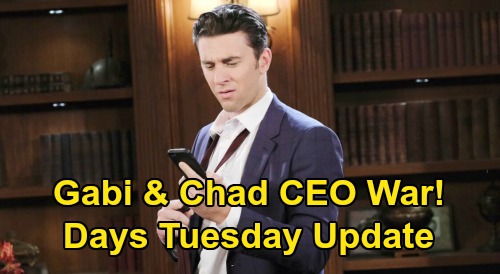 Days of Our Lives (DOOL) spoilers update for Tuesday, April 21, teases that Kate Roberts (Lauren Koslow) will seek a new job. No one in Salem is eager to hire Kate after the whole “Stefano DiMera” (Stephen Nichols) debacle, but Abe Carver (James Reynolds) will at least hear Kate out. She’ll make a solid pitch for why Abe should hire her, so she just might score a position working for the mayor.

Over with Hope Brady (Kristian Alfonso), she’ll open up to Steve Johnson (Stephen Nichols) about her terrible guilt. Hope’s been reassured about her actions as Princess Gina Von Amberg, which certainly weren’t her fault.

DOOL fans know Dr. Wilhelf Rolf (William Utay) drugged Hope and put a microchip in her, so this was a crazy situation.

It’s not like Hope was in control of her behavior, but it was still her body going through the motions. Princess Gina was all in Hope’s head, so Hope still feels responsible on some level.

While Steve and Hope talk about their shared perspective, Kayla will have some updates for Justin Kiriakis (Wally Kurth). Days of Our Lives spoilers say Justin will hear all about Steve’s choice, which involved letting Kayla go.

Kayla was upset about Steve making this decision for her – and Justin will be upset as well. That’s mainly because Justin will no longer feel like Kayla can pick him.

Justin was willing to fight for Kayla, but it’s different if Steve takes himself out of the game. Kayla’s news will definitely affect Justin’s attitude on all this. Days spoilers say Justin won’t want to win by default. They’ll have an in-depth discussion on Tuesday that leads Kayla to a significant conclusion.

Kayla will decide Steve made the right call when he pushed her to be with Justin. She’ll stand by the idea that Justin’s her future, but she’s sure to change her mind down the road.

Next, Gabi Hernandez (Camila Banus) will spar with Chad DiMera (Billy Flynn). They’ll have a heated showdown over DiMera Enterprises and the coveted CEO seat.

Tony DiMera (Thaao Penghlis) will also be part of this war over the company’s leadership. Gabi will fight to put herself back in power, and her plan may briefly look like it’s going to work out. However, Li Shin’s (Remington Hoffman) arrival in Salem should bring some shakeups – starting with a shocking office encounter.

Days of Our Lives spoilers say Gabi will notice someone who looks like Stefan DiMera (Brandon Barash) from behind. Gabi will feel like she’s seen a ghost, but she probably won’t feel the same when this mystery man turns his chair around. Li’s set to appear on Wednesday, so Tuesday’s episode could bring the Stefan confusion and set things up.

Some stunning moments are ahead on Days, so don’t miss all the action. CDL will have other DOOL details to pass along, so be sure to check back for exciting Days of Our Lives spoilers, updates and news.