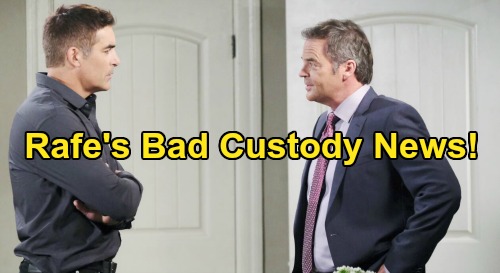 Days of Our Lives (DOOL) spoilers update for Tuesday, April 28, teases that Hope Brady (Kristian Alfonso) will seek out John Black (Drake Hogestyn) and Marlena Evans (Deidre Hall). She’ll offer an emotional apology for everything they had to go through when she was Princess Gina Von Amberg.

Naturally, Marlena and John won’t think this is necessary. Hope might as well have been in a coma since her mind was out of the picture. Princess Gina had taken over completely – and that was all thanks to Dr. Wilhelm Rolf (William Utay) implanting that chip.

Even so, Hope can’t get past the fact that her body was walking around committing horrible crimes and hurting her loved ones. It was still a version of her in Hope’s eyes, so she’ll let John and Marlena know she’s sorry.

Hope may wish she could make it up to them somehow, but that’s not necessary. Just knowing Hope is back and safe will be enough for Marlena and John.

Other Days of Our Lives spoilers say Steve Johnson (Stephen Nichols) will get another earful. Kayla Brady (Mary Beth Evans) was hopping mad after Steve made her choice for her. Steve insisted he would fight for Kayla, but then he changed his mind and decided she should be with Justin Kiriakis (Wally Kurth) instead.

Since Steve has a bad habit of deciding things for Kayla, this was really the last straw for her. Kayla flew into a rage and will fly into another one on Tuesday. DOOL fans can expect Kayla to lash out at Steve, who may insist he just wants what’s best for her.

In an effort to hurt Steve like she’s been hurt, Kayla may pipe up that he’s right. She’s come to her own decision that her future is with Justin, but that decision isn’t going to stick. Kayla and Steve have proven that they always find their way back to each other.

Days of Our Lives spoilers say Kayla will likely run some test for Abigail DiMera (Kate Mansi) on Tuesday. Abigail’s been battling some terrible hallucinations, so Chad DiMera (Billy Flynn) made sure she got checked in the hospital. They’re both hoping for the best, but they’re also preparing for the worst deep down.

Fortunately, Abigail isn’t losing it again. Days spoilers say Chad and Abby will get updates on the source of these hallucinations – and it looks like it’s a person, not a relapse. Chad will hurl accusations at Gabi DiMera (Camila Banus) later this week. He’ll believe Gabi drugged Abigail, so that tells us that drugs will indeed be in Abigail’s system.

Of course, Gabi’s been busy visiting Stefan DiMera’s (Brandon Barash) grave and only vowed to may “Chabby” pay moments before Abigail’s first hallucination. It doesn’t seem like she’s had time to do much of anything.

It wouldn’t be a very exciting storyline if DOOL set up a mystery only to reveal the real culprit right away. Gabi will undoubtedly deny drugging Abigail, and she should be telling the truth.

Over with Rafe Hernandez (Galen Gering), he’ll get some crushing news regarding David Ridgeway’s (Caleb and Kyler Ends) adoption. Rafe was hoping to become David’s official dad, but Justin may insist that won’t be possible.

Due to Rafe’s negligence on Evan Frears aka Christian Maddox’s (Brock Kelly) background check and Zoey Burge’s (Kelly Thiebaud) custody pursuit, this adoption just isn’t going to happen right now. It might happen down the road, but Rafe will have to keep fighting without that father title.

It sounds like the action’s heating up in Salem! Days fans will want to stay tuned for all the chaos that’s looming. Be sure to check out CDL frequently for sizzling Days of Our Lives spoilers, updates and news.