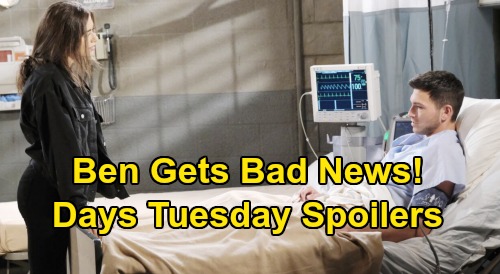 Days of Our Lives (DOOL) spoilers for Tuesday, March 17, tease that Princess Gina Von Amberg (Kristian Alfonso) will beg Dr. Wilhelm Rolf (William Utay) to reconsider. As Dr. Rolf prepares to remove Princess Gina’s chip, she’ll make a last-ditch effort to save herself. Princess Gina is desperate to avoid being turned back into Hope Brady, but that’s exactly what’s about to happen.

DOOL fans can expect Dr. Rolf to turn down Princess Gina’s request. He’ll admit he hates saying goodbye to his creation, but Princess Gina’s time in Salem must come to an end. Days say Kayla Evans (Mary Beth Evans) will make sure Princess Gina’s prepped and ready to go. It won’t be long until Dr. Rolf’s surgery moves forward and Hope’s back to her old self and Princess Gina in effect, dies.

That’s obviously not what Ben wanted to hear, but Ciara will encourage him to stay positive. There’s still DNA evidence against Evan and the charges haven’t been dropped.

Days spoilers say Ciara will feel confident Ben’s release is coming soon – and she’s right! Ben will finally walk free during the week of March 23-27, so he has to be patient just a little longer.

For now, Ben will have more time to chat with Clyde Weston (James Read). Clyde will be relieved that his son’s execution was stopped before it was too late. He certainly didn’t want Ben to die over something he didn’t do.

In Tuesday’s episode, Days of Our Lives spoilers say Ben will bring Clyde up to speed on this whole Evan situation. He’ll mention Evan’s real name at one point, which will leave Clyde stunned. Back when Orpheus (George DelHoyo) was Clyde’s cellmate, they talked about their children – including Christian and Clyde’s stepdaughter, Jordan Ridgeway (Chrishell Stause).

Days of Our Lives spoilers say Clyde will have a shocking realization soon. He’ll determine that he inadvertently put Jordan in her killer’s path! Clyde never could’ve predicted that Jordan would have a child with Evan and meet a grim fate at his hands, but he accidentally set all that in motion.

As for Rafe Hernandez (Galen Gering), he’ll get some help as he struggles to find David Ridgeway (Caleb and Kyler Ends). Lani Price (Sal Stowers) and Eli Grant (Lamon Archey) will do their part to make sure Rafe’s reunited with David, but some twists and turns are brewing.

Rafe, Eli and Lani will follow a new lead that takes them to that seedy motel, but Evan will be all alone once they burst inside. It’ll take more work to track down Orpheus and David, so don’t miss all the action. As other DOOL updates become available, CDL will have the latest Days of Our Lives spoilers and news.