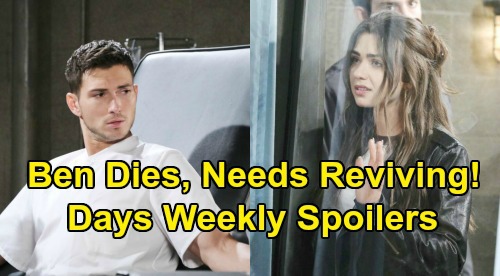 Days of Our Lives (DOOL) spoilers for the week of March 2-6 tease that some bombshells are brewing. For starters, Evan Frears (Brock Kelly) will reveal some startling secrets during a desperate conversation with Sonny Kiriakis (Freddie Smith). Once Evan feels like everything’s falling apart, he’ll lose control and pull out a gun. Evan will decide to lay all his cards on the table and hope Sonny understands.

Once Sonny’s held at gunpoint, Evan will explain that he’s David Ridgeway’s (Caleb and Kyler Ends) father. He’ll tell Sonny why he kept quiet about that and sought the nanny job with Rafe Hernandez (Galen Gering) instead.

Of course, Ciara Brady (Victoria Konefal) is convinced that David’s dad killed Jordan Ridgeway (Chrishell Stause), so that may be something Evan confesses to Sonny as well.

Meanwhile, Ciara will race to save Ben Weston (Robert Scott Wilson) from execution. She’ll get some help from Will Horton (Chandler Massey), so they’ll both barge in on Evan and Sonny’s faceoff before shots can be fired.

Days of Our Lives spoilers say Ciara will fight for the gun and ultimately turn it on Evan. She’ll insist it’s time for Evan to take a little trip to Statesville and stop Ben’s lethal injection.

Sadly, that lethal injection will indeed begin. Days spoilers say Ben will flash through significant memories with Ciara as he starts to die. He’ll flatline around the time Ciara arrives with Evan, who will presumably reveal the truth as Ciara’s demanding. DOOL fans can expect Ben to be revived eventually, so “Cin’s” love story will survive for another chapter.

Over with Xander Kiriakis (Paul Telfer), he’ll become rattled when he spots Dr. Raynor (Victoria Platt). Victor Kiriakis (John Aniston) paid Dr. Raynor to forget what she knew about the baby switch and get the heck out of town. She’s supposed to be sipping cocktails on an island somewhere, not coming back to cause problems.

Over with Justin Kiriakis (Wally Kurth) and Marlena Evans (Deidre Hall), they’ll have a meeting with Stefano DiMera aka Steve Johnson (Stephen Nichols).

They’ll hope they can negotiate Kayla Brady’s (Mary Beth Evans) safe release, but there’ll be more to the plan. John Black (Drake Hogestyn) will want to outsmart Stefano with Justin’s assistance, but their plot will go awry in the end.

Days of Our Lives spoilers say Marlena will be abducted thanks to this botched scheme, so that certainly isn’t good news! Next, Jennifer Deveraux (Melissa Reeves) will unleash her fury on Princess Gina Von Amberg (Kristian Alfonso).

During a heated confrontation, Jennifer will grab Princess Gina’s shirt and yell in her face. Sweet Jennifer Rose definitely won’t be so sweet in this moment!

By the time the end of next week rolls around, Chad will be under mind control. He’ll prepare to carry out some lethal orders – ones that could lead to Kate Roberts’ (Lauren Koslow) death if he’s allowed to complete them.

Kate thankfully isn’t going to die, but she’ll at least have to take whatever Roman Brady (Josh Taylor) dishes out. He’ll be livid with Kate for protecting Stefano and Princess Gina, so Kate will have to put up with Roman’s ranting.

Gabi Hernandez (Camila Banus) will also face Julie Williams’ (Susan Seaforth Hayes) wrath thanks to her newfound freedom. Julie won’t be surprised Gabi used an innocent baby to get off the hook for her crimes.

This will put a damper on Eli and Lani’s reunion, so they’ll get their chance to rip into Gabi soon! We’ll give you updates as other details become available. CDL’s your hotspot for all the latest Days of Our Lives spoilers and news.