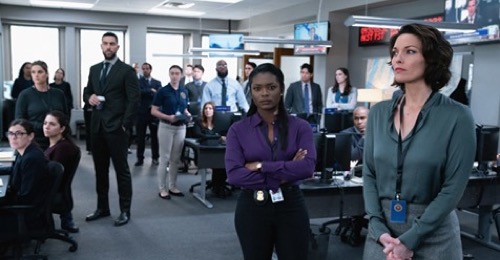 Tonight on CBS FBI airs with an all-new Tuesday, January 14, 2020, season 2 episode 12, “Hard Decisions,” and we have your FBI recap below. In tonight’s FBI season 2 episode 12 as per the CBS synopsis, “A bank hold-up leads the team to a safe deposit box, the contents of which have the potential to destroy national security. Also, Kristen is eager to get back into fieldwork while other team members still have their concerns.”

The First National Trust Bank was invaded. It doesn’t seem like the bank robbers stole anything and so all they did was invade the bank rather than rob it. They didn’t even hurt anyone. The invaders moved like they were military trained and they used those weapons to frighten people, but there was one of them that seemed to be the leader. He was the only one speaking English while the rest were speaking Russian. This guy also went into the area for the deposit boxes and he wasn’t in there long before he came rushing back out. And eventually left with his crew.

The invaders had blacked out the cameras in the room. There was no way to prove they opened a box or stole something and so the FBI traced what they could. They found around that had a fingerprint on it. They then traced it back to Paul Chambers and Chambers had sold plenty of ammo. He usually let them paid using their credit cards and so his cameras picked up on the one guy that paid in cash. The man was later identified as Frank Ryan. Ryan a career criminal with a violent streak.

The agents called in SWAT to act as backup. They then moved on Ryan’s place and got into a gunfight with him and his buddies. The good guys prevailed. They managed to arrest Ryan and his friends. They later told Ryan that he was in real trouble now that he attempted to murder federal agents. They had him over a barrel and they threatened to throw him into a black hole if he didn’t start talking. Ryan told them that it was his crew at the bank and that he removed something from the safety deposit box.

Ryan confessed to doing it because he said that he was hired by an old friend. He said this friend’s name is Adam and that he also acted as a lookout as Adam broke into a condo. He gave them the address to this condo and the agents went there. They soon found the place ransacked. They didn’t find the owner anywhere and so they looked into the man who owned the condo. The owner’s name is Dave Johnson. Johnson actually banked with First National Trust and so they searched his deposit box now that they had a name.

They then got their hands on his deposit box. They found fake passports and detailed accounts in the Caymans and so this Johnson fellow looked he was into some money laundering. Also, whatever was taken from the safety deposit box must have been more important than what was found. The agents were only going to find out the answers to that by talking to this Adam and so Kristen tracked him down. She found out Adam’s full name is Adam Mizrah. He was former Mossad and he booked a flight to Tel-Aviv.

Maggie and OA later arrested him at the airport. They brought in and it turns out NSA wanted to sit in on the investigation. NSA was interested in Adam because he sold confidential information that saw several assets of their cruelly murdered. The NSA took an indictment on him and so the agents used that to get him to talk. They told him if he confessed to a bank robbery that he would be in the clear on the other charges. So, Adam talked. He told them that he was working for a hacker named “Sentinel”.

Adam steals things for Sentinel. Sentinel also hired him to collect a flash drive that he had at the bank and so that’s why Adam did all of this. He even added how it was Sentinel that saw those people die overseas. Sentinel was a hacker who stole from government and governmental agency all so that he could blackmail them for money. He would sell the information back to them and if they couldn’t pay then he was going to sell it to someone else. Sentinel only cared about money. He wasn’t doing this because of some higher calling and he made enemies everywhere with what he did.

Sentinel stops his enemies from coming after him because he said he had a dead man’s switch. If he was ever arrested or killed, all the information he stole would be released for the world to see. He said he left this switch with his friend and the friend seems to be Johnson. Sentinel had needed to get the switch for some reason and so it was imperative that they find him before he used it. It seems he had also stolen from the FBI and so the higher-ups were nervous. They wanted Sentinel found and at first, he leads down the wrong path. He made them go look for the wrong man and thankfully the false flag had an airtight alibi.

They went back to searching for him and they found help from a hot dog vendor who remembered Sentinel. He apparently eats the hot dog and throws away the bun. The vendor thought it was weird and so he remembered Sentinel from when Sentinel came to pick up the flash drive. So, the vendor told them that the guy lived nearby. Kristen then traced Johnson’s movements to the area and she found Sentinel. His real name is Kenneth Bates. He was hiding at his townhouse and not long after they arrested him – he was making threats. He said he knows about a bomb at the NYC Stock Exchange.

He said it was a plot from the North Koreans. He also told them that he knew exactly where the bomb is and that he would tell them if they allowed him to go board his private plane. Sentinel needed to leave town now that everyone knows his real identity. But he was being a jerk with this bomb story and so Jubal decided to mess with him. He let Sentinel believe that the timing for the bomb came and went and so the man eventually admitted that there was a bomb. And all it took was tricking him.

The FBI saved the day and they arrested a notorious hacker, but Jubal realized how much they needed Kristen behind a computer and so he reassigned her to the JOC. Kristen wasn’t ready to go back out into the field anyways and this reassignment helped her more than she knew.