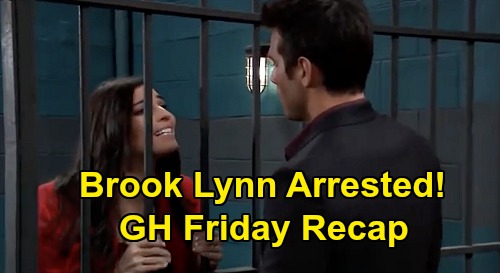 General Hospital (GH) spoilers recap for Friday, March 20, reveal that Jason Morgan (Steve Burton) and Anna Devane (Finola Hughes) continued their argument about Peter August (Wes Ramsey) at the gym. Jason listed out everything he suspects Peter of doing, and Anna insisted that Liesl Obrecht (Kathleen Gati) was behind it all. Anna left in a huff, and Jason threw down his boxing glove in frustration.

Meanwhile, at Anna’s house, Harrison Chase (Josh Swickard) and Willow Tait (Katelyn MacMullen) talked after putting Violet Barnes (Jophielle Love) down for a nap. Chase let it slip that he and Sasha Gilmore (Sofia Mattsson) had talked privately about the situation with Wiley Quartermaine Corinthos (Erik and Theo Olson). Willow understood, and she was glad that Chase and Sasha were able to talk.

Chase then got a call about an incident at the Metro Court and left. Anna returned and immediately poured herself a drink, still upset with her earlier interaction with Jason. She and Willow talked briefly, but Anna wasn’t in the mood for conversation.

At the Metro court, Lucy Coe (Lynn Herring) was approached by Valentin Cassadine (James Patrick Stuart), who pitched a deal to her off-camera. Lucy declined the deal, saying that it would blow her deal with Crimson out of the water and that she needed Nina Reeves (Cynthia Watros). Lucy left and Valentin smiled knowingly.

At a table, Brook Lynn Quartermaine (Amanda Setton) and Lulu Spencer (Emme Rylan) argued and called each other names. Brook Lynn was upset that Lulu had used her Facebook post for a story, and Lulu was totally unrepentant. After some serious name calling, Brook Lynn brought Dante Falconeri (Dominick Zamprogna) into the argument, causing Lulu to douse her with champagne.

Brook Lynn then slapped Lulu and a major catfight ensued. Valentin watched, amused, then whipped out his camera and recorded the whole thing. Brook Lynn and Lulu wound up brawling on the floor, and Lulu was throwing a glass at Brook Lynn as Chase entered.

Brook Lynn accidentally hit Chase, which resulted in her being hauled off to jail and arrested. Meanwhile, Lulu told Valentin to delete the video, which he refused to do. And Chase placed Brook Lynn in a cell at the PCPD, telling her to just be quiet for once. She apologized for hitting him.

At Crimson, Maxie Jones (Kirsten Storms) called Lucy, saying that she was ready to talk about the future. Jasper “Jax” Jacks (Ingo Rademacher) walked in to talk to Nina, and Maxie rushed over, saying that the “cheapskate” was here to see Nina. Jax apologized to Maxie, saying that the Crimson budget was set for now, while Maxie handed her resignation letter to Nina.

Jax and Nina then tried to dissuade Maxie from resigning, but Maxie refused to reconsider. Lucy showed up and Maxie said, “Say hello to my new boss.” Lucy proceeded to say that there was a misunderstanding, and that there was no job at Deception for Maxie. Maxie reeled and left in a huff, while Lucy tried to smooth things over with Nina, who was now peeved about Lucy trying to poach Maxie.

Nina promptly told Lucy that the Crimson/Deception partnership was off. Lucy was horrified and took off, while Nina told Jax that she didn’t know how she was going to run things at Crimson without Maxie. Meanwhile, Lucy tracked down Valentin downstairs at the Metro Court and said that they had business to discuss.

Next, at Maxie’s apartment, Damian Spinelli (Bradford Anderson) frantically knocked on the door, and Peter answered with Georgie Spinelli (Lily Fisher) by his side. This upset Spinelli, since Peter and Georgie were alone together. Turns out, the babysitter had an emergency and Peter stepped in to watch Georgie. The men had an awkward conversation, with Peter offering Spinelli a beer and conversation.

Peter offered to get together sometime, so they could get to know each other, but Spinelli resisted, Peter pointed out that he’d be in Maxie’s life permanently, and that they’d be getting married, per what Maxie said a few days ago at the Metro Court. Spinelli got upset, asking if Peter was going to propose. Peter said no for now – he didn’t want to rush things.

Peter then wondered if Spinelli still had feelings for Maxie, which Spinelli denied. Peter said that they needed to find a way to tolerate each other, or else they’d necessarily force Maxie to choose between them. Maxie then burst in, upset over now being unemployed. The guys tried to console her, then Lucy called to say that things had changed and that she wants Maxie on the Deception team.

Lucy explained that Nina revoked the deal, but that she secured another investor and that they were going to make Deception work without Crimson. Lucy then hung up and turned to Valentin, who handed her a drink to celebrate.

At the Quartermaine mansion, Carly Corinthos (Laura Wright) talked with Sasha and Michael Corinthos (Chad Duell). She wanted to strategize about Nelle Benson Archer (Chloe Lanier), saying that Michael needed to win using any means necessary. But Michael insisted on following the rules. Sasha told Michael to go to the gym, and he reluctantly agreed, leaving Carly and Sasha alone.

Sasha confided in Carly about her idea for Michael to marry Willow, and Carly liked the idea, praising Sasha for putting Wiley first. Carly said that Sasha was her kind of person – a good person that knows how to do bad. Carly encouraged Sasha to bend Michael’s ear and come up with the perfect plan to take care of Nelle.

Back at the gym, Michael arrived to join Jason. They talked about Nelle, and Michael shared his woes, including the idea that he marry Willow. Michael insisted that it wasn’t fair to Willow, and that they needed to find another way.

Friday’s episode of General Hospital was great, and there’s certainly more to come next week, so be sure to stay tuned! Keep on reading CDL for all your GH news, and we’ll be sure to let you know when more spoilers and updates come up.