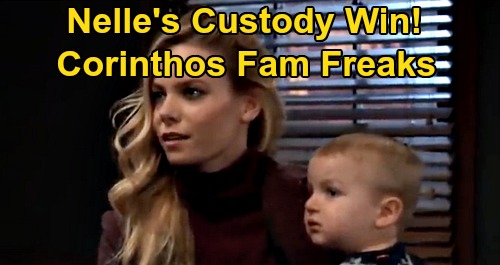 General Hospital (GH) spoilers tease that Nelle Benson Archer (Chloe Lanier) and Michael Corinthos’ (Chad Duell) custody battle’s bound to get nasty. As their courtroom clashing draws near, Michael will grow increasingly concerned. It looks like Michael will sense that Nelle’s gaining ground and could ultimately walk away with a win.

There’s a good chance Michael will marry Willow Tait (Katelyn MacMullen) in hopes of providing a more preferable mother for Wiley Quartermaine-Corinthos (Erik and Theo Olson). However, that may not be enough to keep Nelle from scoring full or at least partial custody. We have to consider the big picture here.

For starters, Nelle and Michael are both felons. Although Michael’s prison stint happened further back than Nelle’s, they’ve both done their time. As long as Nelle can stay out of trouble with the law, her criminal past may not hinder her custody chances too much. Michael has a criminal past as well, so it’s a level playing field in a way.

In fact, Michael’s far closer to crime these days than Nelle. Sonny Corinthos (Maurice Benard) is in the middle of a major mob war – one that nearly cost Michael his life down on the pier. Nelle’s lawyer can argue that Wiley doesn’t need to be anywhere near Michael and his dangerous mob family.

Sonny’s war with Cyrus Renault (Jeff Kober) will surely escalate in the coming weeks, so that’s another problem for Michael. Since Sonny intends to kill Cyrus, things could easily go wrong. Sonny’s first attempt may not be successful, which could set up Cyrus’ retaliation. What happens if one of Sonny’s children gets hurt? Nelle will have more ammo she can use in this custody battle.

Wiley’s surgery didn’t fix the problem and now he requires another procedure in six months, so Nelle can use all of that to her advantage.

Any sensible judge that hears that story will assume Carly and her crew were plotting against Nelle. It’s going to look like they were ignoring Nelle’s parental rights – and they were. That’s an excellent reason to make sure Nelle locks in partial or even full custody. We get that Carly was desperate, but she messed up big time and may have really blown this for Michael.

Nelle also has a new stable job at Crimson and may soon have a biological mother in her corner. General Hospital spoilers strongly hint that Nelle is Nina’s bio daughter.

It might take Nina a little while to process that shocker, but she’ll surely be on Nelle’s side eventually. Nina will want a relationship with Nelle and will likely help her fight for Wiley, who’ll obviously be Nina’s grandson.

This family connection will be helpful for Nelle, who’ll have a supportive mom with plenty of money and a nice home to share if need be. Nina is a respected member of the community, so it’ll mean something if she vouches for Nelle. Everything’s lining up for Nelle to score some sort of a victory. There’s just no way Nelle won’t score at least partial custody with the way everything’s going.

General Hospital spoilers say Nelle’s custody win is sure to infuriate Michael and the rest of the Corinthos clan. We’ll offer the latest news as other GH updates become available. How will Michael handle sharing Wiley with his loathed ex? Don’t forget to drop by CDL frequently for great General Hospital spoilers, updates and news.

"Nelle is evil. Promise me you'll stop her." #GH pic.twitter.com/g5NrFe8OcD