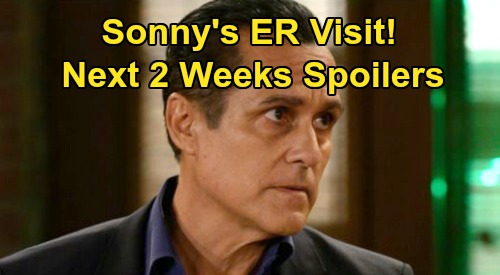 General Hospital (GH) spoilers for the next two weeks tease that more excitement’s looming in Port Charles. During the week of January 13-17, Peter August (Wes Ramsey) will get a step closer to his inevitable downfall.

That’s because Peter will be awfully nervous as he rejects the offer. He won’t want Liz and Franco serving up a meal to thank him for saving Franco’s life. Peter wouldn’t have had to save it if he hadn’t ordered the hit.

As Peter’s guilt revs up, so will Jason’s desire to prove his guilt. He’ll be keeping a close eye on Peter and will hope for more slipups soon.

Other General Hospital spoilers say Nelle Benson (Chloe Lanier) will deliver a shocker. Her wild announcement will leave the Corinthos clan and other PC residents reeling.

Nelle will be a free woman, but what about her dead husband? She’ll likely announce she’s Shiloh Archer’s (Coby Ryan McLaughlin) widow at his upcoming memorial!

Carly Corinthos (Laura Wright) will rage over Nelle’s release and see right through her strategy. She’ll undoubtedly assume this is about those ELQ shares. Over with Harrison Chase (Josh Swickard), he’ll have some important updates to pass along.

Chase will apparently get a clue about the latest Corinthos case, so he may know more about this new enemy that’s targeting Sonny Corinthos (Maurice Benard).

While Chase seeks out Jordan to fill her in, Sonny will head off on a road trip. It looks like Sonny and Mike Corbin (Max Gail) will do some bonding as they travel to New York City for Mike’s study.

Of course, it’s possible Sonny will change his mind about the study during this road trip. Perhaps what Sonny really needs is closure – and this time together could give it to him.

During the week of January 20-27, Lulu Spencer (Emme Rylan) will be protective of Charlotte Cassadine (Scarlett Fernandez). Valentin Cassadine (James Patrick Stuart) may realize the custody drama that’s brewing is going to be worse than he thought.

GH fans can also expect a court order to be delivered, so Valentin may struggle to block Nikolas Cassadine’s (Marcus Coloma) efforts from taking back the Cassadine estate.

Other General Hospital spoilers say Nik and Ava Jerome (Maura West) will reach an understanding. They’ll be on the same page – at least from Nikolas’ perspective. Ava may still be plotting a few things Nik doesn’t see coming, but she’ll have to be careful with her heart.

Next, Michael Corinthos (Chad Duell) will locate Josslyn Jacks (Eden McCoy) down on the docks. It looks like some sort of confrontation’s set to go down potentially involving Joss, Nelle and Sasha Gilmore (Sofia Mattsson).

Nelle will be rattled over this heated encounter – and eventually, so will Sasha. This ordeal will also leave Michael rushing to Sasha’s defense, so there could be an attack on Nelle.

However, it’s also possible Josslyn will get caught in the crossfire. Whatever the case, Sonny will deal with an outburst from Mike and return home to chaos. General Hospital spoilers say Sonny will head to the ER. That could be to support Michael in the aftermath or possibly Joss if she suffers any injuries.

Jordan Ashford (Donnell Turner) will have a mess on her hands due to this emergency – and she’ll fear there’s more drama to come. It sounds some twists and turns are in the works. We’ll keep you posted as other GH news comes in. Stay tuned to the ABC soap and don’t forget to check CDL often for the latest General Hospital spoilers, updates and news.