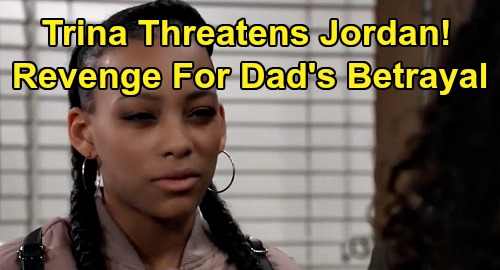 General Hospital (GH) spoilers tease that Trina Robinson (Sydney Mikayla) may soon be on a mission. GH fans know Trina was furious over Jordan Ashford’s (Briana Nicole Henry) accusations against Marcus Taggert (Real Andrews). Trina hates the idea of being the only one who remembers her father as a good man. Taggert’s going to be trashed all over the media, so that’ll be hard for a grieving teen to cope with.

Ava Jerome (Maura West) has some sweet words of wisdom about Trina’s opinion being what matters. Taggert would only care about his daughter’s view of him. Ava reminded Trina that Taggert was truly a hero and that Trina is his legacy. That settled Trina down and gave her some comfort, but it won’t be long until her anger revs up again.

On April 6, General Hospital spoilers say Trina will fume as she enters Jordan and Curtis Ashford’s (Donnell Turner) place. Trina will demand to know where Jordan is, but Jordan will be busy setting Cyrus Renault’s (Jeff Kober) release in motion. That should give Trina a chance to berate Curtis again and keep her fury going strong.

Although Trina is in mourning and doesn’t have all the facts, we still have to examine things from her perspective. Trina already blamed Curtis for Taggert’s death and now his wife is turning against Taggert. Even if Trina accepts that Taggert framed Cyrus, it’s clear that this was important enough to break the law for.

Jordan’s going to grant Cyrus his freedom and make it so Taggert’s actions were for nothing. Taggert’s reputation will be tarnished and the baddie he desperately wanted to put away will be back out in the world. Trina will have so many reasons to want payback, so she might put a plot in motion to make it happen.

Perhaps Cameron Webber (William Lipton) and Josslyn Jacks (Eden McCoy) could even get in on this – particularly Cam since there are some unresolved feelings.

Cameron and Trina may still have a love story ahead of them, so they could bond through a little investigating. They’re smart teens, so it’s easy to imagine Trina scoring an incriminating recording that could take Jordan down.

Despite what Portia Robinson (Brook Kerr) claims, Curtis is most likely Trina’s biological father. How soapy would it be if Trina threatens to send her bio dad’s wife to prison?

Trina’s not in a good frame of mind right now, so she’s capable of anything. It’s clear that Trina’s a bit unhinged due to all her trauma – and things may get even worse after Cyrus’ release.