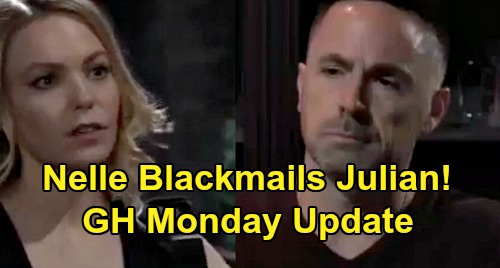 General Hospital spoilers for the new GH episode Monday, May 11, tease that some new developments will shake things up for several characters. For starters, Harrison Chase (Josh Swickard) will taunt Brook Lynn Quartermaine (Amanda Setton) at the police station. Since Ned Quartermaine (Wally Kurth) won’t be coming to Brook Lynn’s rescue, Chase will be eager to see who steps up instead.

It turns out it’ll be Julian Jerome (William deVry) who arrives to bail Brook Lynn out of jail. As for Chase, he’ll cross paths with Nelle Benson Archer (Chloe Lanier) at Charlie’s Pub. Nelle will push Chase’s buttons about losing Willow Tait (Katelyn MacMullen) and point out that she might be willing to reconnect romantically.

Chase will insist Nelle’s delusional if she thinks that’s ever going to happen. Hamilton Finn (Michael Easton) will summon someone to The Floating Rib over the phone, so that’ll most likely be his brother. Chase should happily ditch Nelle to go meet Finn, who’ll probably once again urge Chase to make a confession.

Finn will hate to see Chase throw away true love, but Chase will eventually turn down an offer his brother makes. It sounds like Chase just won’t be willing to let Finn help. Chase will accept his misery for now, but he might make some last-minute moves thanks to what’s going on across town.

GH spoilers say Willow and Michael Corinthos (Chad Duell) will have a heartfelt conversation about the future, so the topic of marriage will naturally be something they discuss. Michael will suggest that their friendship and love for Wiley Quartermaine-Corinthos (Erik and Theo Olson) isn’t a bad way to start off a marriage.

Willow will wonder if Michael can marry someone who’ll probably never love him, and he’ll assure her he has no expectations other that their shared support of Wiley. They’ll ultimately embrace the idea of coming together for Wiley’s sake, so they’ll get engaged and hope this marriage will defeat Nelle in court.

Speaking of Nelle, let’s get back to her over at Charlie’s Pub. General Hospital spoilers say Nelle will overhear Brook Lynn and Julian Jerome (William deVry) talking, which will bring some exciting intel.

Brook Lynn will mention the car crash that left Lucas Jones (Ryan Carnes) comatose, but she’ll assure Julian that her lips are sealed about Julian being the one who caused it.

Brook Lynn’s lips might be sealed, but Nelle’s won’t be! Afterward, Nelle will tell Julian she’d like to make him a very generous offer. Once Nelle notes that it comes from the heart, she’ll explain that she wants Julian to testify on her behalf.

Julian may wonder why that’s so generous, so Nelle will eventually suggest she’s willing to keep her mouth shut about what she knows.