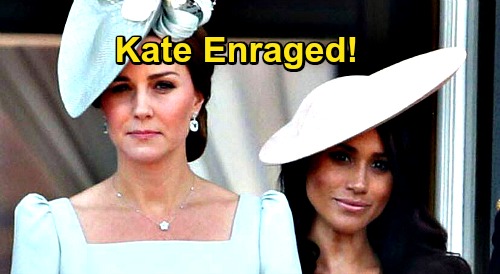 British royals news reveals that Kate Middleton continues to reel from allegations about herself and her family that appeared in Tatler Magazine. Among the claims made in the article were that Kate and Prince William feel “trapped and exhausted” by their royal duties and that Kate is perilously thin just as Princess Diana was at one point.

The article, titled “Catherine the Great” also claims that Kate Middleton had a falling out with Meghan Markle over whether Princess Charlotte should wear tights when she appeared in Prince Harry and Meghan’s wedding. Kate was also described as having “an aura of blandness” and said that she developed a “posher” accent in recent years.

Kate Middleton and Prince William are none too happy with the article, having sent threatening legal letters to the magazine demanding that the article be removed from the internet. However, the magazine’s editor, Richard Dennen, has refused to remove the article and is standing by the author of the article and the sources for the piece.

Well, as it turns out, Kate Middleton knows the editor quite well, and that may explain much of her outrage over the article. Richard Dennen is an old friend of Kate’s from St. Andrew’s University. Kate and Richard were in the same art history course back in university, and they lived close to each other.

It is also believed that Richard was a guest at Prince William and Kate Middleton’s wedding back in 2011. And back in 2004, Kate and Richard went to France together at a point in which Kate and William were on a break in their relationship.

A source has told CNN that Kate feels completely betrayed by the article and that she never saw this coming. The source said: “There are a lot of unanswered questions, particularly who said these things because her real friends would never talk that way about her.”

Regardless, the story is out there and won’t (and really can’t) be taken back at this point. But the past friendship between Kate and the magazine’s editor does help explain much of the outrage that Kate feels about this particular article. Perhaps she expected more from her old friend. Be sure to check back with us at CDL for more British royals news and updates.