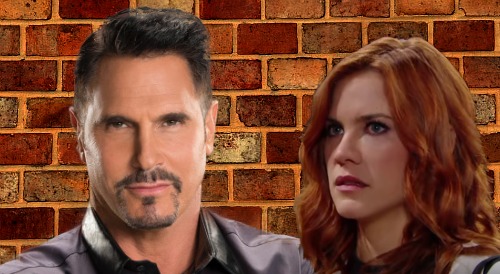 The Bold and the Beautiful (B&B) spoilers tease that Sally Spectra (Courtney Hope) is really in deep with her lies. As B&B viewers know, Sally’s struggling to pull off a fake terminal illness. Sally thought that she could get Wyatt Spencer (Darin Brooks) to reconcile with her before suddenly being “cured,” but that scheme just isn’t going according to plan. Instead, Wyatt has asked Sally to move out of the beach house and into a hospice type facility, and Sally’s pondering her next move.

Well, according to B&B spoilers, Wyatt will soon start feeling intense guilt over his decision to ask Sally to move out. As B&B viewers know, Wyatt made this request of Sally at Flo Fulton’s (Katrina Bowden) insistence, and he didn’t seem to be 100% on board with the decision.

It tore Wyatt up watching Sally’s sad reaction to the request that she move out. And after an upcoming conversation with Katie Logan (Heather Tom) and Quinn Forrester (Rena Sofer), Wyatt’s guilt about asking Sally to move out will go through the roof.

According to the Bold and the Beautiful spoilers, Wyatt will be surprised when Quinn sides with Katie during their conversation about what’s been going on with Sally.

It certainly sounds like Quinn will think that Sally’s best interests will be met if she stays at the beach house with Wyatt, which is surely the position that Katie will take. At any rate, Wyatt will be shocked by Quinn’s stance, but it looks like Quinn will have drummed up some sympathy for Sally, given Sally’s plight.

Of course, it’s only a matter of time until Sally’s ruse comes to light, and then she’s going to have some explaining to do. Flo is getting to the point where she doesn’t trust Sally, and according to B&B spoilers, Flo will soon do some investigating on Dr. Penny Escobar’s (Monica Ruiz) computer and learn some explosive information.

Exactly how Sally’s big lie gets exposed remains to be seen, but once it’s out, there will be plenty of people gunning for Sally.

After all, Sally has duped a lot of people and put them through a totally unnecessary emotional roller coaster. Ridge Forrester (Thorsten Kaye) and Steffy Forrester (Jacqueline MacInnes Wood) will be pretty upset to learn that they agonized over nearly firing Sally only to learn that she was “dying.” And Wyatt and Flo will be furious, as will Katie and even Quinn.

And there will probably be someone else who will be pretty miffed by Sally’s unacceptable behavior, and that’s Bill Spencer (Don Diamont). Bill has never liked or gotten along with Sally, but his feelings really turned when he learned that Sally was terminally ill.

And when he finds out that Sally purposely toyed with both Wyatt’s and Katie’s emotions, he’ll surely be livid over the matter.

As B&B viewers know, Bill doesn’t take well to being duped about things. Sure, Bill’s a world-class manipulator who doesn’t mind taking advantage of people when the mood strikes him, but he doesn’t like being on the receiving end of manipulative behavior.

Bill’s still peeved at Thomas Forrester (Matthew Atkinson) about how Thomas treated Hope Logan (Annika Noelle) and Liam Spencer (Scott Clifton), and he tends to hold onto grudges for the long term.

Well, once Sally’s big scam gets revealed, it’s seriously doubtful that Katie or Wyatt will do anything to get revenge on Sally. Flo probably won’t do much in retaliation either, and that will leave Bill to make sure that Sally pays the price.

Bill could see to it that Sally never works again in fashion, or that she never works anywhere in Los Angeles again.

And considering that Quinn will have jumped on board the Sally train and it looks like she may actually encourage Wyatt to keep Sally living at the beach house, Bill might turn on Quinn, too!

As B&B viewers know, Bill’s not happy with Quinn right now anyway, since Quinn exposed the video of him and Brooke Forrester (Katherine Kelly Lang) kissing. Bill could up and decide to go after both Sally and Quinn if he’s mad enough!

We’ll see what happens here, but Sally will probably end up having to face Bill’s wrath in the end, which will probably be the most harrowing part of her comeuppance for her manipulative ways.

Do you think that Sally will truly pay for all the harm she’s caused? Stay tuned to B&B and be sure to check in with CDL regularly so you don’t miss the latest Bold and the Beautiful news, recaps, and spoilers.