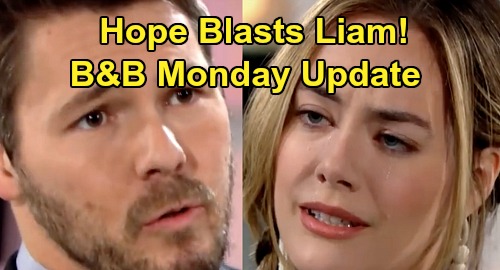 The Bold and the Beautiful (B&B) spoilers update for Monday, February 17, teases that Flo Fulton (Katrina Bowden) will give Wyatt Spencer (Darin Brooks) a nudge back in his ex’s direction. She’s been excited about her new chapter with Wyatt, but his latest news was a game-changer. Sally Spectra (Courtney Hope) is dying, so Flo suggested they both knew what he had to do.

Of course, Flo undoubtedly means Wyatt should reunite with Sally and see her through to the end. This is sure to be a difficult final month for Sally, so neither one of them wants her to go through it alone.

Flo will likely tell Wyatt that she can be patient. Sally’s needs are what matter right now. Flo and Wyatt actually have a chance at a happily ever after – unlike Sally who’s destined to fade fast.

Naturally, Sally could always get a miracle and survive her deadly diagnosis after all. In fact, that story option’s looking more likely by the second! For now, Wyatt won’t know what to do.

Sally will suspect something’s up if suddenly decides he wants her back. She might not even take him now that she’s aware of her fatal illness.

This is a complex situation, so Wyatt’s head will be spinning as he processes all of it. He’ll just be glad to have Flo by his side in this moment. B&B fans can expect Flo to provide a sympathetic ear and all the support she can give. The Bold and the Beautiful spoilers say these scenes really strengthen Flo and Wyatt’s bond.

In the meantime, Liam Spencer (Scott Clifton) and Thomas Forrester’s (Matthew Atkinson) argument will be overheard. After Zoe Buckingham (Kiara Barnes) and Hope Logan (Annika Noelle) listen in on the conflict, they’ll have separate confrontations with the men involved.

Zoe should be a bit gentler than Hope as she asks Thomas for the truth. She’ll just want to know if Thomas is really manipulating her like Liam said.

Thomas will assure Zoe that he’s all in on their future together. He’ll brush Hope off as a non-issue and contend that Liam is a paranoid troublemaker. As for Hope, she’ll rip into Liam over his allegations against Thomas.

When Hope refuses to see the same warning signs as Liam, he’ll think she’s in denial about getting used. Liam will suggest Hope’s own reaction proves Thomas’ plan is working.

The Bold and the Beautiful spoilers say Hope will have an excellent clapback about Thomas’ loyalty. She’ll make it clear that if she were with Thomas, then he wouldn’t go around kissing other women.

Liam’s the waffle king, so that’ll shut him up fast. He’ll know Hope is right to take this dig at him, so he’ll let her take the win and saunter off.

The Bold and the Beautiful spoilers say another fantastic episode’s coming up. Don’t miss all the action and don’t forget to check CDL regularly for some great B&B updates and news.