The Bold and the Beautiful Spoilers: Steffy Wants Finn After Addiction Nightmare – Finn Waits For ‘Steam’ Picture To Come Down? 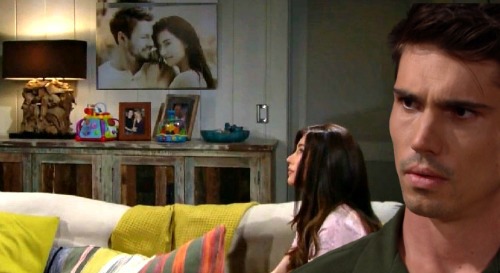 The Bold and the Beautiful (B&B) spoilers tease that Steffy Forrester (Jacqueline MacInnes Wood) has a lot going on right now. On a good note, Steffy has met a wonderful, smart, and talented man, and she now has a glimmer of hope when it comes to getting out of the Liam Spencer (Scott Clifton) rut and the ongoing triangle with Liam and Hope Spencer (Annika Noelle).

But there’s a lot more going on in Steffy’s life right now that’s not so positive, and it all centers around her developing opioid dependence.

It’s become clear to viewers that Steffy has used her pain killers to help her cope with not only her physical pain, but her emotional pain as well. When Steffy got to the point where she was washing down a pill with huge gulps of beer, it was apparent that she was in trouble, and according to The Bold and the Beautiful spoilers, everything will come to a head.

Beginning on Monday, September 21, Liam will become painfully aware of Steffy’s problem, since he’ll find her passed out on the couch.

Well, the good news in all of this is that it looks like Steffy will soon be on the path to healing. The Bold and the Beautiful spoilers say that Ridge Forrester (Thorsten Kaye), Liam, and John “Finn” Finnegan (Tanner Novaln) will unite and stage an intervention for Steffy, during which they each tell her why she needs to get help and the consequences if she doesn’t.

Steffy will probably need some sort of chemical dependency treatment as a result, which should help her put things into perspective and get a handle on why she felt the need to use drugs to numb her pain, plus it will help her pinpoint the root of her emotional pain.

Of course, since this is a soap, Steffy will probably sail through recovery fairly quickly, and when that’s done, she’’ll probably be keen on moving on with her life.

Perhaps through treatment, therapy, or both, Steffy will face just how strongly she’s been holding onto the pain of Liam choosing a life with Hope and Beth Spencer (River Davidson and Madeline Valdez) over her and Kelly Spencer (Colette and Avalon Gray).

Steffy will surely want Finn to be a major part of her future, and given Finn’s strong feelings for Steffy, he’ll want the same.

But since Finn seems to be the highly intuitive and practical type, he may insist that Steffy make sure she’s dealt with all of her issues before they officially move forward together as a couple.

Finn seems to be sensitive to Steffy’s history with Liam and the place that Liam will always have in her life, and he may want to see that Steffy has truly moved on from Liam in her heart – for both of their sakes.

We suspect that once Steffy truly moves past Liam and makes peace with the fact that Liam chose his other family, she’ll probably be ready to take that portrait of herself and Liam off of the wall in her living room.

As B&B viewers know, Steffy has been insisting for months now that she leaves that portrait up for Kelly’s sake, but it’s pretty clear that it’s there for more than just that.

In fact, once Steffy gets to the point where she’s ready to take that portrait down, that will probably be the point at which she’ll be able to fully commit to a new relationship with Finn.

In fact, Finn may even wait until Steffy makes the move to take the portrait down before he feels comfortable in really forging a future with her.

Perhaps we’ll even see Finn and Steffy take the portrait down together. It would certainly be a symbolic moment for the new couple, and they could put the portrait in storage for Kelly to have someday.

Something tells us that we’ll see that “Steam” portrait come down once Steffy’s through her recovery and has dealt with all of her pain. It should be a big moment for Steffy.

We’ll see what happens here, but it does seem that it would really be weird for Steffy and Finn to be actively seeing each other with that portrait of Steffy and Liam still on the wall.

Do you think that Steffy and Finn will take the portrait down together? Stay tuned to the CBS soap and we’ll keep you current on all the latest Bold and the Beautiful spoilers, daily episode recaps, and news. Here at CDL, we’ve got you covered!