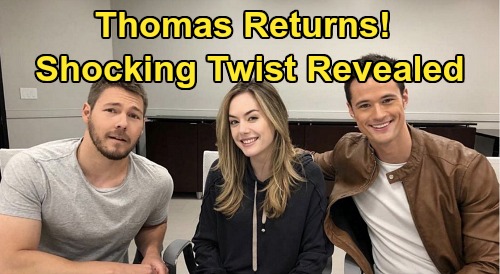 The Bold and the Beautiful spoilers tease that Thomas Forrester’s (Matthew Atkinson) self-imposed exile will end. His return, in order to keep this character fresh, can reasonably adjust his well-earned villain status as well.

Having had time to reflect, Thomas returns to this fictional version of Los Angeles, California, intent to take a hard turn toward respectability. Various options exist within this scenario.

Ridge Forrester (Thorsten Kaye) felt played by his son and he was. There’s no doubt that Thomas had long been manipulating his father’s heart.

Logically, there was no reason to trust that Thomas was telling the truth about his wanting to be a so-called better person. Now, upon returning, he needs to heal the rift he caused with Ridge, no matter what it takes, first.

Thomas can start by living in his own apartment. He can also request scheduled and supervised meetings with Douglas Forrester (Henry Joseph Samiri), whenever Hope says they’re okay.

Underneath it all, Thomas was right about Hope being the best pick as Douglas’ new mother figure. Noelle and Samiri’s characters bonded and came to love each other.

Liam Spencer (Scott Clifton) didn’t see it at first, but the Lope family is bettered by Douglas’ addition. Clifton’s character will certainly resist all efforts Thomas makes, no matter the sincerity. But in time even Liam will at least give Thomas some slack.

Bold And The Beautiful Spoilers – So, What’s The Twist?

Thomas will actually be sincere this time around. Yes, he’ll battle his former persona, sometimes, albeit briefly, slipping back. But he’ll persist, earning his father’s gradually forgiveness and then the trust of selected others.

The search for love is a key component in daytime. That’s been true for Thomas. His challenge will be to search for the right woman and then to sustain his honest efforts with her.

This type of redemptive transformation would spark rightful skepticism. But the caliber of B&B’s writers, the efforts of Atkinson, his colleagues and the production staff can make this projected storyline believable and engaging.