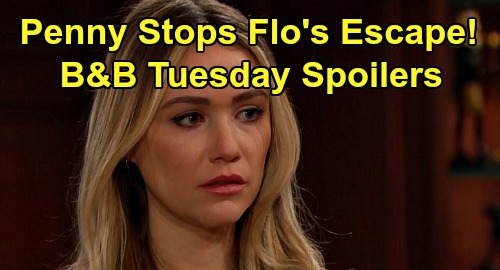 The Bold and the Beautiful spoilers for Tuesday, April 21, tease that Flo Fulton (Katrina Bowden) will totally get the upper hand on Sally Spectra (Courtney Hope). As B&B viewers know, Flo played a trick on Sally and flung a rubber snake in front of Sally’s walker. That caused Sally to panic and momentarily forget all about the symptoms she was supposed to be faking.

Sally had been feigning being weak and out of breath, but then she sure jumped when she saw the rubber snake. Flo then called Sally out on faking her illness and even discovered that Sally had been using makeup to appear to be pale.

Now Flo seems to have Sally right where she wants her, and on Tuesday’s episode, it looks like Sally will confess to faking her terminal illness.

Of course, while all this is going on, Sally will be thinking fast, trying to figure out a way to keep Flo from ultimately telling Wyatt Spencer (Darin Brooks) about her fake death ruse.

Sally will probably go to extremes, possibly even trying different tactics with Flo. But B&B spoilers are clear that Flo will holding all the cards, and she’ll likely threaten to immediately tell Wyatt the truth.

This will probably come after Flo tells Sally exactly what she thinks of her. And let’s face it, Sally’s really got it coming. Sally has deceived a lot of people that she supposedly cares about, and it won’t be pretty when the truth comes out. But for now, Sally will have to face Flo’s wrath and try to figure out her next move.

Ongoing B&B spoilers say that Sally will get a big break when Dr. Penny Escobar (Monica Ruiz) comes on the scene while she and Flo are arguing. Ultimately, Flo is going to get knocked over the head by Penny, which will only add to Sally’s immense problems.

Not only will Sally be faced with Flo’s knowledge of what she’s done, but she’ll have Penny’s assault of Flo to deal with, too!

Meanwhile, on the new episode of B&B on Tuesday, April 21, Wyatt will get grilled by Katie Logan (Heather Tom) and Quinn Forrester (Rena Sofer) about his decision to ask Sally to move out of the beach house.

Of course, none of them will have any idea what Flo has just learned about Sally, so they’ll still think that Sally is on death’s door.

It appears that Katie will think that Sally needs to stay put at Wyatt’s place for as long as she possibly can, and that moving her to a medical facility right away is a mistake.

Katie will probably point out that Wyatt knows she’s right, given how conflicted he is about his decision to ask Sally to move out right now. And much to Wyatt’s surprise, Quinn will take Katie’s side in the matter.

All of this will just intensify Wyatt’s feelings of guilt over asking Sally to move into a medical facility. But little will he know about what’s currently transpiring over at the beach house.

Wyatt will be clueless that Flo is in imminent danger at the hands of Penny and Sally, and that Sally could do just about anything at this point to protect her secret.

It sounds like a lot of B&B drama is heating up for Tuesday’s episode, so stay tuned! Keep CDL bookmarked for all the latest Bold and the Beautiful updates, and we’ll keep you posted on the latest hot spoilers and news.