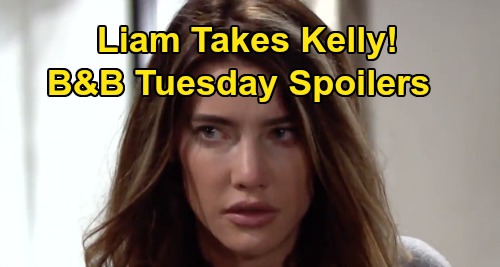 The Bold and the Beautiful spoilers for Tuesday, September 22, tease that Steffy Forrester (Jacqueline MacInnes Wood) will have some serious explaining to do to Liam Spencer (Scott Clifton).

As B&B viewers know, Liam freaked out after he found Steffy unconscious and unresponsive on the couch at her home, and when he asked her if she was still taking her pain meds, she flatly denied it.

But Liam didn’t buy it, and a quick search of the house turned up the illegal pain pills that Vinny Walker (Joe LoCicero) had given Steffy as a secret present.

Well, now Liam is under the impression that John “Finn” Finnegan (Tanner Novlan) was the one who supplied Steffy with the pills, and Steffy’s going to have to tell Liam that she didn’t get the pills from Finn. That’s going to really alarm Liam, who will realize that Steffy got the pills illegally.

Of course, since the pills were unregulated and off the street, who knows what was in them. The dosage might have been much larger than Steffy was used to, which is why she fell asleep so soundly and couldn’t be roused.

But Steffy is going to have an even bigger problem than the drugs in her system when she realizes that Liam is going to act in order to protect their daughter.

According to B&B spoilers, Liam will tell Steffy in no uncertain terms that she has a problem and needs help, and he’ll probably remove both the pills and Kelly Spencer (Colette and Avalon Gray) from Steffy’s home.

Liam will want Kelly out of that environment and out of the danger that Steffy is creating in her home right now, and that’s going to leave Steffy angry and devastated.

The Bold and the Beautiful spoilers say that Steffy will unleash her fury on Liam on Tuesday’s episode, since she’ll really have no other recourse than to lash out and take out her frustrations on Liam.

The Bold and the Beautiful spoilers say this will end with Liam taking Kelly and getting out of there. And once Steffy is alone and without her pills, she’s going to be feeling pretty desperate.

Meanwhile, on the new episode of B&B on Tuesday, September 22, Hope Spencer (Annika Noelle) will find herself getting worried about the situation that’s unfolding between Liam and Steffy.

As B&B viewers know, Hope and Thomas Forrester (Matthew Atkinson) are spending some time together as they care for Douglas Forrester (Henry Joseph Samiri), and Thomas has been venting about Liam needing to leave Steffy alone.

According to B&B spoilers, Thomas’ ongoing talk about Liam and Steffy will start to have an effect on Hope. Of course, Hope has been worried about Liam’s obsession over Steffy’s relationship with Finn anyway, but it seems that the more Thomas goes on about the need for Liam to back off of Steffy, the more Hope will realize that Thomas is right.

Of course, by the end of the episode, we might well see Liam return home with Kelly and a whole big story to tell Hope about what’s really going on with Steffy.

By that point, Liam should know that Finn didn’t give Steffy a refill and that Steffy got her pills illegally, so he’ll probably be less worried about Finn and more worried about Steffy’s illegal drug use.

At any rate, it looks like Hope’s concerns about Liam’s concerns about Finn will quickly be put aside as everyone starts to really worry about Steffy and what she’s going through right now.

By the end of the week ending September 25, Liam, Ridge Forrester (Thorsten Kaye), and Finn will be planning an intervention for Steffy, so the action is going to heat up from here.

Tuesday’s episode of B&B sounds terrific, so stay tuned to the CBS soap! We’ll give you updates as B&B news comes in. Don’t forget to check CDL often for the latest Bold and the Beautiful spoilers, news, and daily episode recaps.