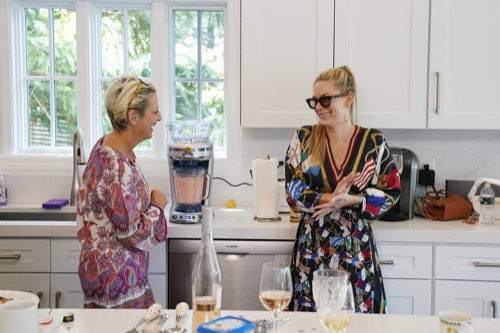 Ramona took the ladies to a winery. Luann was the only one missing. She woke up earlier and she complained about her room as normal. This time she said she saw a spider in her room. Luann then went to either her chiropractor or to her boat. It was pretty unsure and she hadn’t turned up for drinks later. The ladies were sad she wasn’t coming. They forgot that Luann was working on her sobriety and maybe that’s why she didn’t want to go to a winery. There was one other person they knew didn’t drink and they still brought her along. Leah was new. She said she didn’t use to drink because she felt like she had lost control over her life.

Leah was just now beginning to drink again. She was also the first to realize why Luann might not want to be there with them and she was the first person Tinsley opened up to about Bruce. Tinsley liked Bruce. She wanted to spend time with him and he was almost making it impossible to do so. He has three kids. He was a very hands-on father and so Tinsley understood that part. She also understood why he and his ex-wife needed to be a part of each other’s lives. Tinsley merely struggles with how he was even bringing in his friends and that it still couldn’t be the two of them. Tinsley told Leah all about it.

She later told the rest of the ladies. They all began opening up to each other. Ramona mentioned how the other day she began questioning where does she belong and she said she cried for her mother. She hadn’t done anything like that since she was a kid. She had needed her mother and her mother sadly passed twelve years ago. Ramona was very vulnerable to them. They all shared stories. Leah talked about when her life was out of control as a teenager and how her parents left her with nuns because they didn’t know what to do to help her. And so Leah admits that staying with those nuns had helped save her life.

She worked to put herself back together. She went into business for herself and she came to see that her parents leaving her like that has been the best thing for her. Dorinda also opened up as well. Dorinda admitted there isn’t someone she feels like she can lean on. She’s the anchor in her family and so there was never anyone there for her. Dorinda spoke about her deepest darkest secret. She thought Sonja would do the same and instead Sonja talked about everything else. She literally everything besides what she’s vulnerable about and that ended the sharing. The women were bonding until then and Sonja sort of ruined it.

The ladies returned to the house. Luann came back. She said she was feeling better now that she’s seen a chiropractor and she was the first to notice that Sonja was drunk. They were heading to a party later. They all got ready together and they went to a party with one of Ramona’s new friends. Ramona has been making a lot of friends. It’s even been considered annoying by Sonja who feels like these new friends were superficial. Sonja said she’d much rather be with her long-term friends who she knows she can rely on and not these rent-a-crowd friends that Ramona is making. Ramona was admittedly showing off.

Ramona pointed out to several big houses in the Hamptons on the trip to this Joe Farrell’s house. She showed Dorinda where her friends were staying and she told her what they were known for. Like her friend who invented the light in kids’ sneakers. Ramona showed him off and she was ready to do the same with her friends at the party. She introduced them all to her real housewives’ friends. Sonja was acting weird. Sonja was being very formal with these people in spite of having met some of them before and Sonja was telling off Ramona for being fancy. Ramona was the host of this get-together. She was trying to be a good hostess and Sonja was making that hard for her.

Sonja was drunk. She was also upset because the bar didn’t have a gin and she felt a nearly forty million dollar house should have gin. The house did have other features. The ladies were given a tour and they had fun in the bowling alley in the basement. Sonja’s drinking was also making very daring. She said stuff about everyone. She talked about Leah and how Leah is rough after the edges. She talked about Ramona being high and mighty. She also said Ramona and Joe couldn’t become a thing because Ramona was going to need more sex than he could provide.

Sonja got so drunk that she became sloppy. She was talking to Dorinda’s friend Elyse and she said that her husband would tell her to buy clothes which made her feel embarrassed. Elyse pointed out to Sonja that she had been treated as an accessory. This set off Sonja who claims she was her husband’s partner and not his accessory. Sonja created a massive scene. She left her friends embarrassed and most of them walked away rather than deal with her. Sonja was like that the rest of the night. She made Elyse apologized for her statement and she began talking about her vagina. She tried flirting with some kid at the party who was way too young for her.

Sonja was such a mess that she took the lady’s everything to get her home. They later returned home after Sonja had embarrassed everyone and Ramona said this is why Sonja wasn’t invited to certain events. The ladies were all happy to put what Sonja did behind them. Only they learned the next morning that Luann. Luann wrote Ramona a text message which she included Dorinda on and she said she left after the crap hospitality. She said her room smelled of dog pee and it had spiders. Ramona later showed off Luann’s room to everyone else and Luanna had it good. She even had her own living room.

Luann had no reason to complain about her room and she used that as an excuse to go back home.