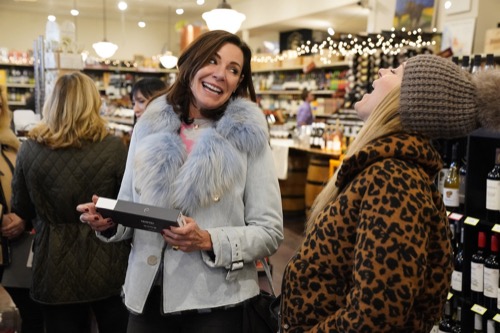 Sonja confronts Luann about paying her less than she deserves to perform in her cabaret show, and Dorinda steps in to defend Sonja. Meanwhile, Elyse approaches Ramona about the current state of their friendship.”

Dorinda calls Sonja, she leaves her a message. She tries to call Leah, her voicemail is full. Elyse and Luann, she reaches their voicemail.

At Sonja’s apartment, Elyse shows up. Sonja said she had to go to a spa after that Halloween party to recover. They sit down to have lunch together. Sonja says that she started drinking before she left for the Halloween party. Elyse asks what is going on with Ramona. Sonja says she cares for Ramona but doesn’t understand what she is doing lately.

Luann meets with Leah, they are out shopping. Leah is hungover, she may be younger than the other women but she has a hard time keeping up. Ramona shows up, she tells them that she thinks Dorinda is in mourning, in a lot of pain. Leah says she has to go, Kiki’s dad is under the weather, so she has to pick her up and bring her to her house. Luann turns to Ramona and tells her that she looks forward to going to the Berkshires, and hopes they can make this trip about having fun because the Halloween party was a disaster. Luann tells her that she just knows how to push Dorinda’s buttons. Ramona says it is not her, it is Dorinda.

Sonja and Leah arrive at Blue Stone Manor in the Berkshires, Dorinda is in the kitchen making food. Dorinda loves the changes in the house, she feels it is more alive. Dorinda shows the women to their rooms. Ramona and Luann are on their way, Ramona just keeps talking about Dorinda at the last party. They arrive at the house, Luann thinks the house looks like Blue Stone Manor on steroids. Ramona arrives positive, and it works, Dorinda is in a good mood. Leah shows the women a post that Leah did on social media, “it’s all fun and games until someone pisses me off.”

Luann says that she thinks Elyse has a problem with Ramona, it’s just one more pawn in the game of chess.

Elyse arrives, Dorinda greets her at the door. Elyse walks into the dining room, the women are already eating and drinking. Dorinda loves having the girls at her house. She takes Elyse upstairs and shows her to her room. Back in the kitchen, the women are all gathered together. Elyse mentions that she was not invited to an after-party, after the Halloween party. Ramona says that if Elyse wants to have this conversation they can have it in the party.

Ramona and Elyse walk out and go out to another room. Ramona tells Elyse that she would rather do this one on one, but the other women followed them. Dorinda is enjoying Ramona squirm as Elyse speaks her mind. The two women are raising their voices. Ramona gets up and walks out of the room, she says she doesn’t do this in front of everyone, Luanna laughs and says that Ramona is the queen of scenes. Ramona and Elyse are now in the kitchen together, Elyse says that she became one of her very close friends, Ramona says she has 50 close friends. Elyse laughs and says she has the same friends, they are not close, just in their social circles.

In the other room, Luann says that Ramona is far from perfect, but the toast was really dark. She says she is not defending Ramona. Ramona returns to the room, Dorinda says it almost appears like the is not happy to be around them anymore. In the end, Elyse and Ramona make up.

Dorinda starts a fire, she tells Ramona that she should just be peaceful. Ramona tells her that lately she has been spending a lot of time alone in the Hamptons and she loves it.

Everyone goes into the salon to enjoy the fire, they decide to stay in and order food. Luann and Sonja are standing up, Luann says they are doing a show together, and Sonja mentions that she never pays her. Sonja tells Luann that she is exploiting her, Luann turns and tells her to bug off and sits down. Sonja says that she is a Broadway actor, Luann says she is not and she does not need her in her show. In fact, Luann goes on to say that she doesn’t want Sonja in her show, she is done. Luann walks out of the room, Ramona follows her and tries to calm her down.

Dorinda doesn’t help the matter, she tells Sonja that Luann was disrespectful and she is going to stand up for her. Dorinda leaves the room and goes to find Luann. Dorinda tells Luann that Sonja is crying, shame on her. Luann tells Dorinda not to get involved, Dorinda reminds Luann that Sonja helped her with her sobriety. Luann returns to Sonja, with Dorinda and Ramona following, she tells Sonja that she is worthless and will never be in her show.