BY Heather Hughes on January 29, 2020 | Comments: one comment
Related : Soap Opera, Spoiler, Television, The Young and the Restless 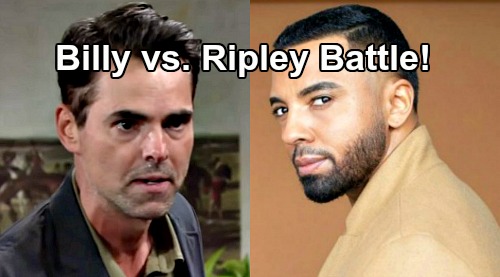 The Young and the Restless (Y&R) spoilers tease that Amanda Sinclair (Mishael Morgan) will have to face a dark part of her past. Y&R fans know Amanda filed a restraining order against her abusive ex-fiancé – and he filed one in return. However, that won’t stop Ripley Turner (Christian Keyes) from tracking Amanda down and causing drama.

Amanda already has a tracker on Ripley and has been quite concerned about him finding her. She didn’t like the attention that came with the hostage crisis at the Grand Phoenix. Amanda was also hesitant to get wrapped up in another high-profile case after all the will scam chaos. She’s doing everything she can to fly under the radar.

Even so, Amanda’s had moments of terror – like when she got a phone call with silence on the other end or when the tracker lost its signal briefly. Amanda’s definitely on edge over Ripley and the damage he could do if she’s found.

Since Ripley is set to debut in early February, Amanda will have to tackle the threat. She’ll have no choice but to deal with Ripley, but she should get some help.

For a while, it looked like Y&R was going with Amanda and Nate Hastings (Sean Dominic) as a potential pairing. Nate and Amanda still have a nice friendship, but Amanda and Billy Abbott (Jason Thompson) seem poised for couple status now.

Although Amanda recently cut off her friendship with Billy, he may give her a good reason to reinstate it…or make it more.

The Young and the Restless spoilers say Billy will get into a fight of some sort. He’ll cross paths with someone at the bar, but it won’t be Ripley just yet. Billy will manage to get a bit banged up, but this could be a precursor to the real peril – the kind of peril only Ripley can bring!

Amanda’s an awfully strong woman, but it’s easy to see how terrified she is when it comes to Ripley. This guy really has Amanda shaking in her boots.

Amanda’s bound to be frozen with fear once Ripley shows up, but The Young and the Restless spoilers say that’s where Billy may come in. Is a major Billy vs. Ripley battle brewing?

Someone will have to shut down Ripley’s threat and put him in his place. It needs to be Billy since he’s the one Amanda chose to confide in. She trusted Billy enough to open up about her ex-fiancé – and Billy expressed outrage over the situation.

Billy’s bound to be riled and ready for a fierce fight once he crosses paths with Ripley. The Young and the Restless spoilers say Billy will be risking a lot by going up against this villain.

Ripley sounds like a true baddie, so rushing to Amanda’s defense should bring serious trouble. We’ll give you updates as other Y&R news comes in. Stay tuned to the CBS soap and don’t forget to check CDL often for the latest Young and the Restless spoilers, updates and news.