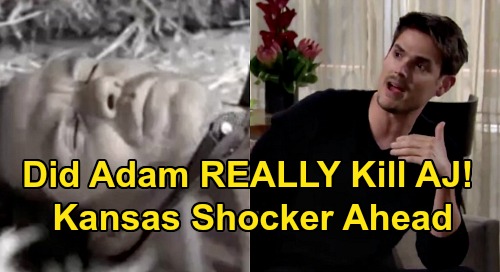 The Young and the Restless spoilers document that Adam Newman (Mark Grossman) is beginning to see flashes in his memory. Cutting to the jump, what exactly did he do as an eleven-year-old in Kansas?

The answer to the above question isn’t known. Viewers have only been shown an unknown actor, who portrayed the deceased father of Adam’s childhood friend, Alyssa Montalvo (Maria DiDomenico), supposedly lying dead on the floor of a barn.

Young And The Restless Spoilers – Does Victor Newman Know The Truth?

Victor Newman (Eric Braeden) told his son what he believes the truth to be. But the Moustache only arrived in the aftermath.

Victor’s been working under the assumption that paying off the Coroner put this issue to rest and protected Adam from ever learning what happened. That assumption proved false.

So, is it possible that Victor has mistakenly believed that Adam killed AJ Montalvo (no actor’s name known for his role)? Of course this also assumes that AJ actually died.

Y&R hasn’t presented a retrospective flashback that actually shows a younger version of the character Grossman now plays killing anyone. Nothing has been seen that even places Adam in the barn.

The above doesn’t mean Adam wasn’t there and that someone else killed AJ, or that he died on his own. The presented storyline could prove that Adam did kill him in defense of his mother.

All the viewers know is what they’ve been told, which is true for Victor and now, for Adam as well. The theory that Adam wasn’t involved in this scenario and that A.J. died through other means would explain why Grossman’s character hasn’t recalled the event.

Young And The Restless Spoilers – Climax Set To Arrive in Kansas

It appears as though this storyline is about to reach its climax in the near future. As the ending to the arc arrives Adam will either be confirmed as the person who killed AJ, with his memory of the event likely restored.

But maybe the caretaker did it, or one of AJ’s henchman, or some enemy settled a grudge? Alyssa, or someone in her family can’t be ruled out as the person who committed this crime either, as enough isn’t known to reach that type of conclusion.

Thankfully, Adam’s memories are returning. His awareness of that specific time in his life will either lead to an acknowledgment, or a claim of innocence.