BY Sean O'Brien on May 11, 2020 | Comments: Leave Comments
Related : Soap Opera, Spoiler, Television, The Young and the Restless 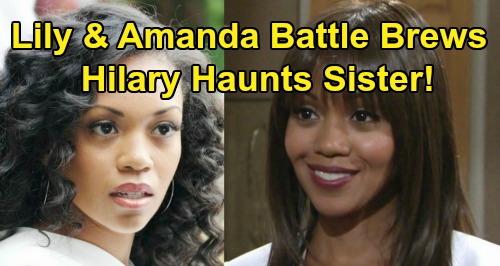 The Young and the Restless spoilers document that Lily Winters (Christel Khalil) and Amanda Sinclair (Mishael Morgan) now work for the same company. While collegiality might initially exist within Chancellor Industries new media division, there are two main points of contention that lie ahead.

Billy Abbott (Jason Thompson) has often been the source of trouble. He stands to be that again, with Lily already seeing glimpses of his rogue workplace style.

Amanda’s decision to serve as legal counsel will put her in Billy’s path on a regular basis. Even if Lily and Billy never consider a personal relationship, the likelihood that Amanda will side with him on various business decisions is strong. And with that a triangle of sorts will form.

Young And The Restless Spoilers – Brash and Sassy Remix

Viewers recall when Jill Abbott Atkinson (Jess Walton), her name at the time due to being married to Colin Atkinson (Tristan Rogers), put her son in a mix with Vickie Newman (Amelia Heinle) and Cane Ashby (Daniel Goddard) at Brash and Sassy. That group’s bickering was incessant, which was good for soap but bad for business.

So, Jill was right to expand CI’s reach. But Lily would have been a good hire as the sole head of the division, as her level-headed nature projects to success. Traci Abbott’s (Beth Maitland) addition would have nicely complimented Lily’s efforts and together this upstart part of the company would have been primed for success.

Traci does provide a sense of balance within the current arrangement that includes her brother. But she’ll likely be forced to negotiate disputes as Billy’s thoughts veer from work to his growing personal interest in Amanda and potentially, Lily as well.

It must be noted that Billy stood strong while the J.T. Hellstrom (Thad Luckinbill) storyline played out in the recent past. He held Villy’s family intact while Vickie was dealing with that extended tortuous time in her life.

But Thompson’s character’s return to his self-destructive ways impacted Vickie and their children last year. Eventually he concluded that she wasn’t supporting his authentic self. That was the newest phrase Billy used to describe his latest self-centered quest.

With Villy destroyed yet again, Billy began turning his attention to a potential new love interest. Amanda is also single and appears interested in Thompson’s character, although she has begun dating Nate Hastings (Sean Dominic).

Young And The Restless Spoilers – Hilary Hamilton’s Past Revisited

Nate began the verbal push for Amanda to explore her genetic history, as she is an orphan. It’s an easy leap to see Amanda revealed as Hilary Hamilton’s (Morgan’s initial Y&R character) sister and with that Lily’s old feelings about Devon Hamilton’s (Bryton James) wife could be linked to modern times.

So, Traci may not only have to negotiate business disputes between the media division’s co-heads, she may have to intervene in personal skirmishes between Billy, Amanda, and Lily as well.