BY Sean O'Brien on May 10, 2020 | Comments: Leave Comments
Related : Soap Opera, Spoiler, Television, The Young and the Restless 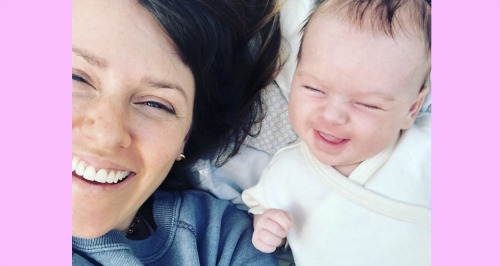 The Young and the Restless spoilers document that Elizabeth Hendrickson (Chloe Mitchell) is celebrating her first Mother’s Day with daughter, Josephine. The longtime Y&R star and her husband, Rob Meder, welcomed their first baby in March.

The Mother’s Day weekend photo Hendrickson shared provides her followers with a double-dose smile, as the mother and daughter are both laughing in the picture that was digitally captured and shared on Instagram.

Hendrickson posted the following message aside of the photo, “I love that you already have a strong selfie game.” followed by a laughing face emoji.

Hardcore Y&R fans know that this section header refers to the real name of the character that Hendrickson has portrayed since 2008. It was that year the show SORAS’d (soap opera rapid aging syndrome) Esther Valentine’s (Kate Linder) daughter from a child into an adult.

The girl who Esther named in honor of Mrs. C, Katherine Chancellor (Jeanne Cooper), was originally played as a baby by twin child actors Darla and Sandra Greer in 1990 and 1991. Danielle Ryah assumed the role in 1994, which is when this character was last seen.

Young And The Restless Spoilers – Arrival In Genoa City

Y&R decided to write her back into the show in 2008, as Esther’s daughter returned to town having changed her name to Chloe Mitchell. Hendrickson’s initial major storyline involved being pregnant with a child she tried to pass off as Cane Ashby’s (Daniel Goddard).

The above ruse was revealed through a complex storyline that had Cane’s presumed half-brother, Billy Abbott (Billy Mitchell), confirmed as the father of Chloe’s baby. Delia Abbott’s (as played by Sophie Pollono) eventual tragic death took place years later, permanently scarring Chloe and Billy. Hendrickson and Miller’s performances throughout that arc were splendid.

Young And The Restless Spoilers – Staying Connected While Being Apart

Hendrickson, like many of her fellow Y&R stars, take to social media to remain connected to the fans during the production shutdown. While use of the digital medium became very popular during the last decade, its importance increased exponentially when the pandemic caused stay-at-home orders to be issued.

No one knows when Y&R will be able resume production, or when newly recorded episodes will subsequently be aired. But in the meantime this long-running soap opera’s audience can continue following and interacting with the actors who are part of the show’s great cast.

From our first moments together to every moment that will follow I am forever changed. Thank you for choosing me to be your Mama. I love you my sweet Jojo. Happy Mother’s Day to all the Mamas out there!