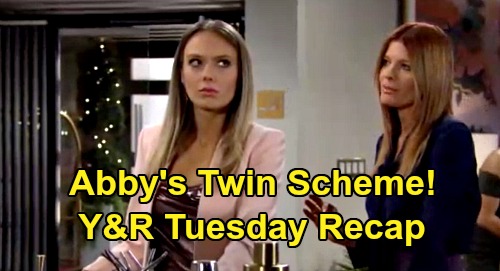 The Young and the Restless (Y&R) spoilers recap for Wednesday, March 11, teases that Adam Newman (Mark Grossman) and Chelsea Lawson (Melissa Claire Egan) will have a strategy session. Adam will reiterate that Nick Newman (Joshua Morrow) only accepted the CEO spot so he couldn’t have it. He’ll feel confident Victor Newman’s (Eric Braeden) going to watch Nick’s every move.

Chelsea will feel like Adam should keep an eye on the situation and wait before he strikes. Adam has to be ready if this payback plan’s going to work. After Adam gets a call from Chance Chancellor (Donny Boaz), he’ll agree to a meeting at Society.

Y&R spoilers say Chance will have good news about Phyllis Summers (Michelle Stafford). He won’t think Phyllis is going to be a problem anymore.

Since Chance will still feel indebted to Adam, he’ll want to make sure all the loose ends are tied up. The conversation will ultimately shift to Nick taking over as Newman’s CEO. Thanks to the press release that Victor put out, Chance will be able to show Adam the big announcement.

Meanwhile, Nick pops in the ranch and checks on Victoria. He kids around about Victoria needing to reclaim her spot before he messes up. Victoria won’t want Nick joking about the company – this is serious business. She’ll seem agitated and will wonder if Nick’s really ready to tackle the challenge.

After Victoria settles down, she’ll offer Nick an apology. Victoria will seem frazzled as she frets and will eventually ask if they can talk later. Nick will assure Victoria that everything’s under control as she gets cozy on the sofa for a nap.

Once Victoria’s asleep, Nick will whisper to Nikki Newman (Melody Thomas Scott) about his worries. He’ll think Nate Hastings (Sean Dominic) needs to stop by and weigh in. After Nate gives Victoria a quick checkup later, he’ll offer a reminder to Nikki.

Victoria suffered PTSD after her ordeal with J.T. Hellstrom (Thad Luckinbill), so this stabbing chaos was a tough setback. Nate will think Victoria’s family has to give her time to heal and hope for the best.

At the Grand Phoenix, Phyllis will talk to Billy Abbott (Jason Thompson) about gaining full control of the hotel. They’ll bicker as Phyllis argues Victoria and Amanda Sinclair (Mishael Morgan) deserve better. She’ll snark that Victoria literally ended up with a knife in her back, but she’ll quickly realize that was taking things too far.

After Phyllis apologizes, Billy will do the same and suggest he’s happy for her hotel success. Next, Phyllis will cross paths with Abby Newman (Melissa Ordway). The Young and the Restless spoilers say Phyllis will drop hints to indicate she knows Abby and Chance broke in. She’ll also mention her backup plan and argue that nothing’s safer than a safety deposit box.

Once Chance stops by the hotel, Abby will give him updates on the other recording. Chance will want to find it and destroy it, so Abby will have an idea. After doing her best Phyllis impression, Chance will admit it’s good. Abby will scheme to gain access to Phyllis’ safety deposit box and vows not to let anyone stop her.

At Jabot, Billy will pay Ashley Abbott (Eileen Davidson) a visit. He’ll be touched when Ashley wonders how he’s doing since she’s the first person who’s asked. Billy will embrace Ashley and bring her up to speed on all the Ripley Turner (Christian Keyes) details. Since Ripley entered a guilty plea, there’s not going to be a trial.

Billy will open up to Ashley about his regrets and how Victoria seems to hate him now. Ashley will give Billy a pep talk and bring up Jill Abbott’s (Jess Walton) latest offer. She’ll think Billy needs to accept the job Jill pitched at Chancellor Industries. They’ll also discuss Dina Mergeron (Marla Adams), who can’t recall who she is or where she is.

Ashley will think about all the years she spent resenting her mother. She found a way to make peace with Dina and now doesn’t know how to say goodbye. Dina has had such a massive influence on Ashley’s life.

At Crimson Lights, Chelsea will fill Chloe Mitchell (Elizabeth Hendrickson) in on her engagement to Adam. Chloe won’t be thrilled, but Chelsea will insist they’re perfect for each other despite their flaws. She’ll eventually convince Chloe to express happiness for her, but Chloe will want Adam to treat Chelsea right.

Back at the penthouse, Chelsea will give Adam a sweet gift. She’ll have three tickets to Kansas so they can take Connor Newman (Judah Mackey) to the farm and do some wedding planning. Adam and Chelsea will declare how much they love each other before Chelsea assures Adam he’ll get everything he wants. The Young and the Restless spoilers say they’ll seal it with a kiss.

Finally, Nick will head to Newman Enterprises and voice his displeasure. The press release made it seem like a permanent CEO change, so Nick will disapprove. Victor will promise that Victoria will indeed take back the reins. He’ll argue that they just can’t show any sign of weakness right now.

As for Adam, Nick will feel confident his brother’s coming for them. Victor will fully intend to protect his family’s legacy, so we’ll see how that works out for him! Once other Y&R updates come in, we’ll be sure to pass along the latest news. Don’t forget to check out CDL regularly for great Young and the Restless spoilers.