The Young and the Restless Spoilers: Week of April 20 Preview – Kyle’s Big Victory, Theo’s Down & Out – Chloe’s Baby Shower 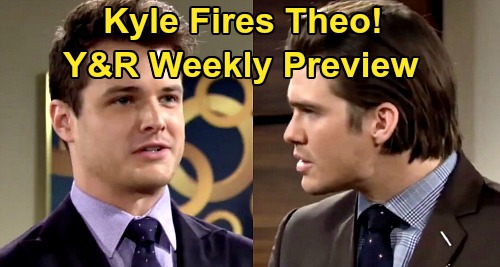 The Young and the Restless (Y&R) preview spoilers for the week of April 20-24 tease that it’ll be a week of fun parties and unlucky breaks. For starters, let’s talk about Chloe Mitchell’s (Elizabeth Hendrickson) baby shower. Kevin Fisher (Greg Rikaart) will get in on the present-opening action as well since they’re both expecting this bundle of joy.

Chelsea Lawson (Melissa Claire Egan) will express her excitement as she brings Connor Newman (Judah Mackey) over for the bash. This doesn’t seem like an event that’d be all that entertaining for kids – particularly a boy like Connor.

He likes videogames, sports and skateboards, so he probably won’t care all that much about the baby swag Chloe picks up.

However, Bella Fisher (Martie Blair) should be there to keep Connor company. Chelsea and Chloe have already joked about starting their matchmaking efforts early, so it’s a good idea to have more Connor and Bella bonding.

Michael Baldwin (Christian LeBlanc) and Lauren Baldwin (Tracey E. Bregman) will also attend this baby shower, so it’ll be great to see the Baldwins again. This won’t be the only party going on in Genoa City since Sharon Newman (Sharon Case) will have one of her own at the cottage.

Since Sharon’s surgery is coming up, this will serve as a nice chance to chill with her loved ones beforehand.

Sharon will also deliver some somber instructions to two family members – just in case something goes wrong during the procedure. Nick Newman (Joshua Morrow) will promise to look out for Faith and Noah Newman (Robert Adamson) if Sharon isn’t around.

Through Sharon’s signed healthcare proxy form, Mariah will also be in charge of making decisions if her mom can’t make them herself.

These are things Sharon will want to think about since there are always risks when you go under the knife. Even so, the mood will remain hopeful at Sharon’s definitely-not-a-pity party. Everyone will give Sharon the support she needs as she gets ready for her surgery the next day.

Over with Summer Newman (Hunter King) and Kyle Abbott (Michael Mealor), they’ll celebrate Theo Vanderway’s (Tyler Johnson) downfall. After Theo takes the bait and gets caught stealing an old pitch of Jack Abbott’s (Peter Bergman), he’ll try to play it off as a lesson learned.

Of course, The Young and the Restless spoilers say that won’t work for Kyle, who’ll promptly fire Theo with Jack’s approval. Kyle will be even more thrilled when Jack loves his real pitch, but it seems he may battle guilt later. Perhaps Kyle will feel like he played dirty, even though Theo was responsible for his own actions.

Summer won’t Kyle to worry about that since Theo’s the one who cheated and got caught. Kyle worked on an actual pitch, so he deserves this victory. Y&R fans can expect some low moments for Theo in the week ahead. The Young and the Restless spoilers say Theo will realize he screwed up massively, but the damage will be done.

Finally, Nate Hastings (Sean Dominic) will enjoy a toast with Amanda Sinclair (Mishael Morgan), who’ll fall harder by the second. This romance will start to heat up, so stay tuned to watch Amanda and Nate sparkle!

As other Y&R news emerges, we’ll pass along the hottest updates. It sounds like some great episodes are on the way. CDL’s your go-to source for Young and the Restless spoilers, updates and news, so don’t forget to stop by often.