The Young and the Restless Spoilers: Will Lola Rosales Be Seen In GC Again? – Sasha Calle Emmy Nominated Performances Appreciated 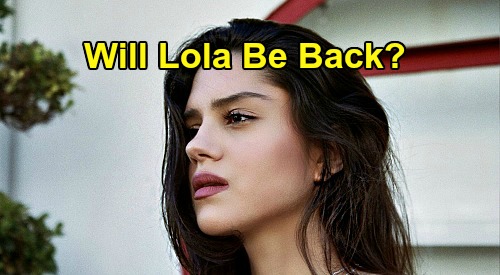 The Young and the Restless spoilers document that Lola Rosales (Sasha Calle) may have left Genoa City, Wisconsin, for good. It’s hard to know whether the 2020 Daytime Emmy nominated actor will be seen on the show again, or if so for how long.

Past buzz indicated that Calle was taken off contract. The production shutdown, that started in mid March, resulted in the final new episode of Y&R being broadcast in late April. This unusual factor has prevented fans from confirming what the actor’s specific status is.

Young And The Restless Spoilers – No Work For Sasha Calle Or Simply Sporadic?

It’s possible that Calle is still tied to this soap opera, meaning that she’s now on a recurring contract, or if not, will be called back in the future. The actor and singer doesn’t list Y&R status on her social media pages.

Her character became a major part of the show after the actor debuted in late summer 2018. Lola and Kyle Abbott (Michael Mealor) experienced a spark that eventually led to a relationship. While their path to the altar wasn’t straight, they made it.

A big wedding happened last year, but surprisingly ended in divorce just months later. Kola’s demise and Lola’s sudden need to be in Miami, Florida, where her new restaurant is under construction, logically implies that Calle’s character is being written out, or that Lola’s presence has been significantly subdued.

Lola was, in effect, the anti-Summer Newman (Hunter King). Maybe that was the problem?

Y&R could have written Lola as more secure, rather than have a character who wasn’t playing off of Kyle’s first love. But that’s being very picky, as it’s always easy to look back and offer a critique after any storyline has played out.

A simply answer to Lola’s fate could be steeped in creative beliefs. Former executive producer and head writer Mal Young was responsible for introducing Lola and her family.

The current regime has moved away from nearly everyone who was connected to her, as Lola’s younger brother, sister-in-law, mother, and father have all been written out of the show since 2019. Rey Rosales (Jordi Vilasuso), her older brother, is the only family member who remains in GC.

Young And The Restless Spoilers – Kola Was Worth The Investment

Devoted soap fans likely reaffirmed their belief that Kola’s quick end felt pushed when watching recent classic episodes, where Kyle and Lola were obviously in love. However, viewers know, from experience, that such unnatural breaks happen in daytime, as ongoing cast adjustments are standard.

Kola’s love story took time to build and required viewer’s emotional investment. Fans bought in and were rewarded with the wedding and projected longtime couple. But it is possible to accept the Skyle rebound and still feel that the Kola arc was worth it?

As for Calle, it would be great if she earns the Emmy in the Younger Performer in a Drama Series category when the winners are announced this Friday, June 26. Her performances were consistently solid.